For some time now, I’ve debated on launching this new blog section that will take aim at revisiting music that released ten years ago. It’s interesting to see how much things can change in the world and in life in just a decade and music is a good example of that. 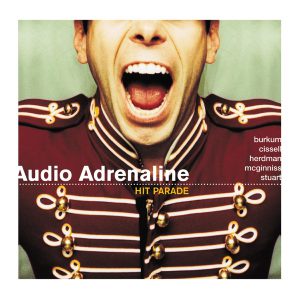 For “10 Years Later…,” we hope to look at some records that released 10 years ago, re-evaluate them, highlight them as something worth checking out still today, or even compare them to the current release from the same artist.

The first project I want to look at myself is Audio Adrenaline‘s March, 2001 best-of release, Hit Parade. While Audio Adrenaline is no longer around today, two of their founding members, Will McGinniss (bass) and Mark Stuart (vocals) can be found heading up a new worship endeavor called Know Hope Collective. That group of worshippers are set to release their self-titled debut album on Integrity Music March 1st. As many Christian music fans know, Audio A disbanded in 2007, releasing one final hits album during the previous fall, titled Adios. To me, as a longtime fan of the band’s work, the 2001 collection, Hit Parade (review), really seemed to highlight the band’s glory days. Stuart’s voice was starting to get a little rough, but he still handled most of the lead vocals and the band was still filling venues and rocking festivals like few could.

I’m sure there are more songs on Hit Parade that will sound dated to young ears than found on Adios, but both projects offered 17 tracks with Parade containing two solid brand new songs that were worth the price of the collection alone, “Will Not Fade” and “One Like You” (Adios also offered two new songs, with one of those being a cover song and another being a farewell anthem. The Special Edition release offered a third new recording, also a cover song). But for 2001, the band had just enough records that a 17-song hits project represented their best and most memorable songs really well. It was to the point that Adios had to include cuts from an additional three studio albums that it made it too easy to exclude some crucial songs from the band’s catalog.

Now that Audio Adrenaline’s catalog of music has officially wrapped up, Hit Parade stands out as the strongest collection of 90s rock hits from the band’s career (I’d be tempted to re-rate the project with a perfect 5 stars today). The only thing that would be missing to make this record stronger would be a couple cuts from their fall 2001 studio album Lift (particularly “Glory” and “Tremble”). Still, as a collection of 90’s pop rock highlights, Hit Parade represents Audio A very well ten years later. This band is truly missed!