Well hello again, everyone! Miah here, and I would like to officially wish all of you a very Happy New Year on behalf of everyone in TgT. So far, 2011 has been a great year, as we’ve been in the studio pretty much all of this year (which has been about a week or so haha), working on our next EP, which will likely be out sometime soon! It’s a new year, so what better way to ring it in than with brand new music too! We’re very pumped to get this new project out and in your headphones! Get ready everyone, it’s going to be awesome!

So 2010 has come and gone. Some of you might not know this, but TgT has been a band for almost five years (March 2011 will be our fifth anniversary). With that, 2010 was without a doubt our best year as a band yet, as well as our busiest. What an incredible time of new experiences, new friends, and new blessings from God! For instance, we had the great pleasure of meeting new friends and amazing musicians such as the guys in Kutless, Trevor of TFK, Matt Hammitt of Sanctus Real, and others. We also were blessed to spend some time at the home of three time Super Bowl champion defensive back Je’ Rod Cherry, an amazing man of God with a heart for ministry and a wonderful family. What a blessing to get to know these great men, who serve as inspiration and examples to all of us.

As stated earlier, 2010 was our busiest year to date, having finished out the year with just under 200 shows. Some of these shows included tours with our good friends in Satellites & Sirens, Temple Veil, and Eleventyseven, all of whom helped make this year probably the most fun we’ve had on the road as well. You can see all of our tour recap videos with all of those great bands on our Youtube site www.youtube.com/thegreattransparency. Along with the consistant touring, TgT took the stage at several major festivals this year including Lifest (playing right before FM Static at this event was a personal highlight for me, and meeting Trevor and spending some time with him was awesome), Soul Fest, Cross Fest, Ampalooza, and Ignite Festival. On the festival note, TgT has just learned that we’ll be appearing at the Alive Fest here in Ohio this year! I love festivals for many reasons, but for me, it’s just a blessing getting to see so many talented bands in one place, and to get to know some of those artists on a personal level, and to see their hearts in action. Such great times! Another festival highlight this year was for Tommy, as he took in the Casting Crowns performance at Lifest litterally three feet away from their drummer backstage.

In between touring and all of the festivals, we played a variety of spot shows with great artists such as Kutless (with a crowd of almost 1,000 that night), Fireflight, Run Kid Run, Abandon Kansas, Philmont, Disciple, Spoken, Kids In The Way, Wavorly, White Collar Sideshow, and John Reuben. For a few of those bands, it was my first chance getting to see them live, and I can tell you that all of those shows did not dissapoint.

As some of you know, we had a few tunes out on the radio this year, including our single “Don’t You Ever”, which stayed in the top 30 over at ChristianRock.net for 13 consecutive weeks, and our take on the Christmas classic “O Holy Night” which hopefully a majority of you were able to grab here at JFH as a free download during the holiday season. We’re already talking about what song we want to do this year, so if you have any suggestions, feel free to let us know on our Facebook page sometime! We LOVE to hear your feedback and ideas!

2010 saw a changing of th guard at the position of bass. We said farewell to our good friend Chris and welcomed another dear brother in Marshall Wilver, who played with TgT in the early days, but has returned. So please be sure to say hello to Marshall at a show soon! We also began some great partnerships with some awesome companies such as SoZo Guitars, TRX Cymbals, Reverend Guitars, Knucklehead Strings, and the amazing ministry organization RYFO, who everyone needs to check out at ryfo.org. TgT is blessed to be working with such great companies!

Finally, 2010 was the best year for me personally as my wife Amanda and I welcomed our first child into this world on May 31st, our daughter Leelah Louise! She is now 7 and a hald months, is starting to crawl, and sprouting some teeth! Such a huge blessing! Leelah’s arrival truly shores up the definition of 2010 for not only myself, but for all of TgT: NEW. 2010 brought so many new things for all of us, and I know that 2011 will be no different. I thank God for His never ending mercy, and for the gifts He’s given us to be able to tour all over this nation and share some good news with all of you! I’m looking forward to doing much of the same this year, and we’ll be bringing new music with us! So, make this new yeat a great one, and share love whenever you can! God bless you all, and thanks for all of your support! See you on the road! 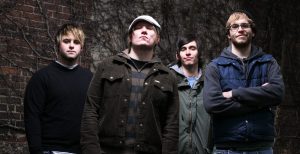 “‘Unfall’ Track-By-Track Behind The Song” by Chase Tremaine