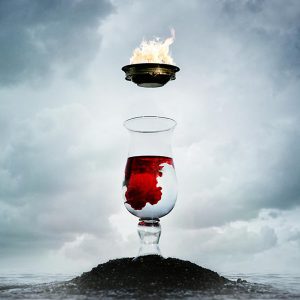 It’s very possible I’m in the minority when I say this, but when The Classic Crime released their third record Vagabonds last year, I felt the result was particularly underwhelming.  It definitely wasn’t a horrific record, but I felt many of the tracks weren’t especially powerful (with a couple bordering on slightly offensive).  And when compared to the Tooth & Nail signees’ second record, The Silver Cord, it just doesn’t seem to measure up.  But as a result, The Silver Cord looks like an even greater musical achievement in retrospect.  The quintet’s debut Albatross got the band started in the right direction, and their follow-up polished up their sound efficiently.  It’s aggressive in some areas (“Gravedigging,” “5808,” “Abracadavers,” “Medisin”), but it also takes its time when most effective, making the fifteen-track album full of ambition and variety.  With so many songs on one record, they’re all surprisingly very strong, but with some major highlights in consideration, “Salt In the Snow” is the real standout (and, in my opinion, perhaps one of the best rock songs of the last decade).  The Silver Cord isn’t especially spiritual, but it’s nonetheless a well-constructed, thoughtful, and very memorable record from 2008 that hits all the right notes.
– Roger Gelwicks

The Classic Crime
The Silver Cord (2008)

Our synopsis: “One of 2008’s best records, The Classic Crime successfully link fun and proficiency together to create one strong epic rock album.” (Recommended by JFH’s Roger Gelwicks)
Perfect For: Contemplation, Self-Reflection, Relationships
Song Highlights: “Just a Man,” “Gravedigging,” “Salt In the Snow”, “Abracadavers”, “Closer Than We Think,” “The Beginning (A Simple Seed)”

So, what are your thoughts on and experiences with the album The Silver Cord? Do you recommend it? If so, why?

“A God Who Goes to Great Lengths” by J.M. Farro

“FIF vs OCS” by Scott Fryberger