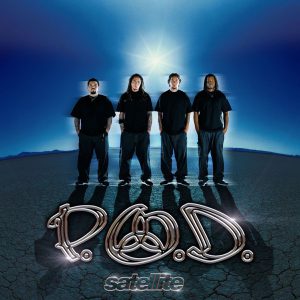 The next installment of ‘10 Years Later,’ features P.O.D.’s Satellite.  Not many remember, but this album was released on one of the saddest and most tragic days in American history, September 11, 2001.  It was a terrible first week to get album sales, but the perfect timing for an inspirational song like “Alive.”  When all of America was grieving, “Alive” was ruling airwaves as a sign of hope despite recent events.  The track was even the first rock tune to reach the number one position on MTV’s Total Request Live.

Satellite kicks off with the adrenaline filled “Set it Off” and never really backs down until the end with the Grammy-nominated “Portrait.”  The album captures many of P.O.D.’s influences from Bad Brains, Santana, Bob Marley, and others.  They also refused to back down from their Christian stance and message even after the hugely successful Southtown.  Satellite were nominated for an unprecedented (for a hard rock band) six MTV Video Music Awards in 2002, a single Grammy nomination in 2002, and two Grammy nominations in 2003.  This is by far their most successful, and most popular, release of their career and it is currently certified triple platinum by the RIAA.

Though the album was a departure from their original hardcore sound found on Snuff the Punk and Brown and more melodic than the smash hit Fundamental Elements of Southtown, P.O.D. scored big with Satellite.  The album showed they could be diverse and do something beside thrash, scream, and rap.  The album has several great sing-a-long tracks.  “Alive,” “Boom,” “Youth of the Nation,” and “Satellite” are easily favorites.  Tracks like “Without Jah, Nothing” capture a sliver of their former hardcore selves, while “Ridiculous” shows off their reggae roots and “Masterpiece Conspiracy” is a flashback to Southtown.

Though there really isn’t any current P.O.D. music to compare Satellite to (When Angels and Serpents Dance is over 3 years old now), hopefully there is some on the horizon.  Fans are hoping to have a new P.O.D. album coming by year’s end.  An album at the end of the year would be a perfect way to lead into the band’s 20th anniversary in 2012.  If you haven’t listened to Satellite in years, then there is no better time to pop it in or upload it to your MP3 player than now.  Get ready to enjoy some amazing music from years past.

Review: “GLO – The Bible For The Digital World”