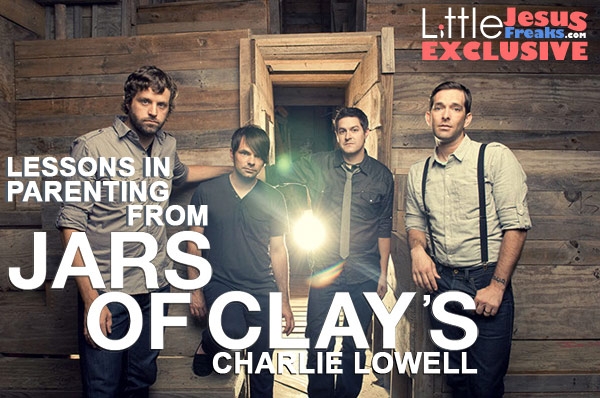 Charlie Lowell (Jars of Clay): Some advice a good friend, kind of counselor friend, told me a few years ago – and it’s not so much for your son’s age, but he said, “Always remember that your kids have a complex inner world and that our tendency is to simplify it and put it in a box and go, ‘They’re being that.’ But usually there’s so much more going on inside to pull out and pay attention to.”

Charlie: Yeah. Which is hard to remember.

Charlie: A lot of it was learning about ourselves. And that we look to these places to find our worth because we weren’t necessarily given it at the right age. I mean, Bono jokes about “I need to get in front of 80,000 people a night to be reminded that somebody cares,” or he has some kind of self-deprecating joke about the need for people’s approval. And it’s not that extreme for us, but I think a lot of the voices as men and boys that we hear is like “You don’t have what it takes. You don’t measure up, why try? Someone else is going to do it better than you.” So it just was kind of an effort to offer something different to our kids, y’know?

Charlie: I think just the innate wildness of boys. Just this kind of rambunctious energy that he’s not learning from his brothers – he’s growing into it and discovering it. But so far it’s still cute and sweet with Finn, but pretty soon it’s going to be annoying or…

Charlie: Yeah, baby proofing. Like, what level do we want to change our house to avoid damage?

Charlie: Unless he’s doing something really dangerous and harmful, you can kind of ignore it. Like, Finn’s throwing food on the floor for the dog, and the more we get upset about it, the more he enjoys the attention. It’s like, he’s going to outgrow it, we have hardwood floors and we have a dog that cleans up after the baby. *laughter*

For the full interview with Charlie about Jars of Clay’s latest album, “The Shelter,” visit Jesusfreakhideout.com.

“If I could change one thing about you, I wouldn’t.” by Josh Taylor

“We Come From A Land Down-Under” by Adam Dawson

We Recommend: Sixpence None The Richer, “Divine Discontent”