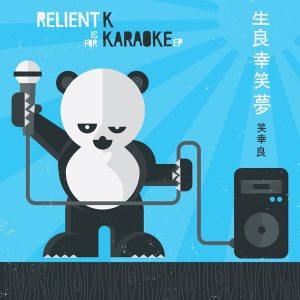 Relient K is releasing a brand new EP of cover songs next Tuesday, June 28th, titled K is for Karaoke. The EP serves as a precursor for a full album with the same title releasing October 4th. With the new EP almost here, I’m ranking the songs as a countdown from the least standout covering to my favorite…

It’s a faithful rendition, and that’s all it is. It works better during their live sets. Weezer have their own feel and charm that just doesn’t really translate when others try to cover it, at least in a studio setting without the roar of a crowd.
6. “Baby” by Justin Bieber
Though Thiessen sings it like a champ, it can’t beat the fact that they completely scraped Ludacris’ rap during the bridge. They could have had a ton of fun with this, but instead the four-fifths of the song they do sing is very faithful to the source material, and that’s about it. Regardless, it’ll be the biggest seller on iTunes. We all know this is true.
5. “Doctor Worm” by They Might Be Giants
I hadn’t heard this They Might Be Giants song until after I had heard Relient K’s cover. I was struck by just how much the two sound identical. Thiessen definitely borrows some of his vocal chops from TMBG. This song is kinda weird, but it works as a goofy Relient K track. It kind of sounds like an actual Relient K song. And it’s a lot of fun.
4. “Crazy” by Gnarls Barkley
Thiessen’s vocals shine here, because he does a good job of nailing it, while not really taking it too seriously. It’s a fun song with a funky beat, that Relient K somehow works out without sounding too weird. Job well done.
3. “Everybody Wants to Rule the World” by Tears for Fears
Relient K did little to take this one out of the 1980s, and that’s exactly how it should be. It sounds a little wild as a Relient K song, but, man, I can’t get it out of my head. I love it. I can’t even really explain it, you just have to hear it.
2. “Girls Just Want to Have Fun” by Cindi Lauper
Definitely the most energetic song on the EP. I’ve always said that Matt Thiessen likes to state his intentions for each record he does somewhere on the album. We get the point of this EP right from the get-go- it’s all about having fun. Don’t hit me, but I think this version if superior to the original.
1. “Here Comes My Girl” by Tom Petty & the Heartbreakers
When looking at the track listing, I probably scratched my head the hardest at this choice. Tom Petty? Really? I mean, I love Tom Petty. But…Tom Petty? Really? But it works. So well. They have a ton of fun with it, and it works as a (slightly wild) Relient K track. It’s got fun verses, rousing chorus lead ins, and a well-earned, melodic chorus that will have you singing along by the end of the second verse even if you’ve never heard the song before. This I promise you.
— Josh Taylor

“Serving the Lord while listening to awesome music!” by Karen M.