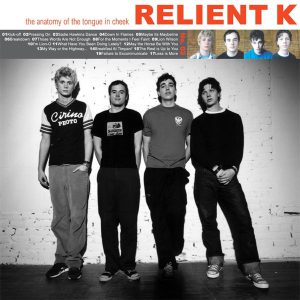 I still remember walking around the electronics section of Wal-Mart at the age of 17 with the money from my part time minimum wage job burning a hole in my pocket.  At that time in my life, I was really just starting to build my massive collection of albums (which is now 2,000+ strong).  I stumbled across four dorky looking dudes in tracksuits jumping hurdles in the Christian section; the band name was the same of a crummy Dodge car… Relient K.  The CD had a sticker on it that read something like, “For fans of MxPx”.  Being that MxPx was (and still is) my favorite band, I blindly made the purchase.  The album was entertaining, but nothing too great.  It was, however, good enough for me to keep my eyes open a year later when their next album came out.

The Anatomy of the Tongue in Cheek made the purchase of the so-so, self-titled debut worth it.  The growth they showed between the two albums was high.  If I only knew then the path of growth and maturity these guys had truly embarked on.  I loved, and still do, the quirky nature of the band.  Even though their newer albums hardly resemble their old, they still carry a sense of dorkiness with them.

Anatomy is packed full of both funny songs like “Sadie Hawkins Dance” or “May the Horse Be With You” and serious songs like “Those Words Are Not Enough” and “For the Moments I Feel Faint”, which remain favorites to this day.  The album made these guys Christian music superstars.  During the tour for this album, I saw Anberlin and Relient K together.  I actually ran into them pre-show at a burger joint just down from the venue.  The guys were completely cool and signed the only thing I had… a napkin.  The crowd at the show was your normal crowd for a Christian punk show.  The next time I saw them, with MxPx, the screams of 14-year-old girls nearly drove me crazy.  The last time I saw them was at Rock the Universe in 2008.  My wife and I left the show because of middle school girls (ha ha!).  I was a dorky guy that played guitar in high school, why didn’t I have that effect on the opposite sex?  Regardless of the crowd, I have seen Relient K around 6 times and they never disappoint.

While Two Lefts Don’t Make a Right… But Three Do and Mmhmm are my favorite Relient K albums and I enjoy the maturity of Five Score and Seven Years Ago and Forget and Not Slow Down, there will always be a special place in my heart for The Anatomy of Tongue in Cheek.  This year Relient K is treading into new territory. They released, in typical Relient K fashion, the K is for Karaoke EP in June with the full-length covers album, K is For Karaoke, to follow in October.  While cover songs are a staple of the Relient K live experience, they are recording them for the consumer for the first time.  If Tom Petty’s “Here Comes My Girl” and Weezer’s “Surf Was America” are any indications, K For Karaoke should be a success.  As you sit back and think of music from a decade ago, The Anatomy of Tongue in Cheek should not be forgotten.