With every week — and sometimes every day — offering new experiences in the parental role, one unexpected encounter came when I went in to have my blood taken earlier this week on Monday.

The unimportant detail to this story is it was a routine check-up on the levels of my thyroid (fun times!), but it’s something I thankfully only have to endure once or twice a year. And one simple fact remains…

This time, with Will being 22.5 months old, it was a much different experience than the last time we brought him along. With his recent obsession with Toy Story and Buzz Lightyear, Will had his Buzz figure in-hand (well, it was mine, but I digress) — a 5 or 6-inch plastic figure that is perfect for a little guy like him to run around with.

When it came time for me to be ushered into a little room, curtain drawn, with my blood also about to be drawn, I sat down in the chair nervously, put my right arm out there on display and turned my head in the opposite direction. Amy sat in a chair positioned in a way where she could hold the curtain closed and block Will from darting out at any moment. So with us all trapped in there — nurse armed with a needle included — Will restlessly, but quietly, was bouncing around the room. At one point, he noticed how uncomfortable I was and he noticed his momma was trying to console me. I was quiet, but my mind was not. Needles. *shudder*

With my left arm laying across the little table on the other side of the chair, and with Amy’s hand resting on my forearm, Will came to a realization. Something was wrong. It was then the toddler decided that it was more important for me to have Buzz than him. He walked over, pushed Buzz into my open left hand, and turned around. It was as if he was saying “I have no idea what in the heck is going on, but I have a feeling you need ‘Buzz Lightyear to the rescue!’ more than I do.”

Once the nurse prepped my arm and gave me the warning of the needle’s forthcoming – and unwelcomed – intrusion, Will paused his frenetic wall-bouncing to stop and watch my blood being drawn. That in itself was a little awkward, but he seemed entirely unfazed by…and all too curious (uh-oh) about what was happening. When all was said and done (and I had finished using Buzz Lightyear as a stress ball), I handed the toy back to my son with my heart a little warmer. The little guy is awfully protective of his favorite toys, so I knew that gesture was a big one for him.

Parenthood definitely continues to deliver surprises when you least expect them. 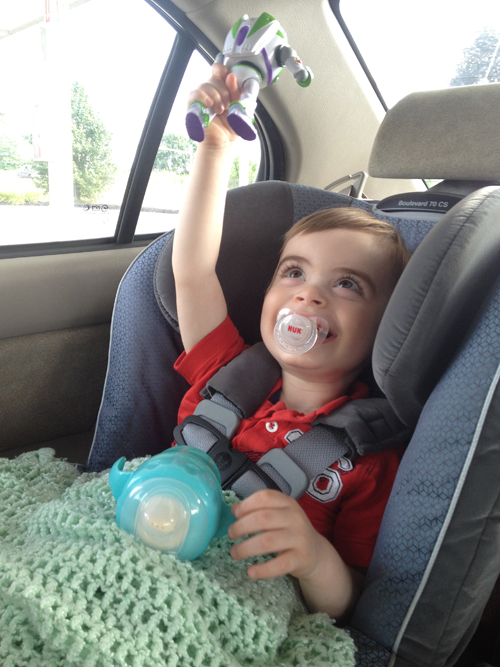 Will with Buzz from a different day, on July 14 2012 (He would do this motion if you said “To infinity… and beyond!”)

We Recommend: Leeland, “The Great Awakening”