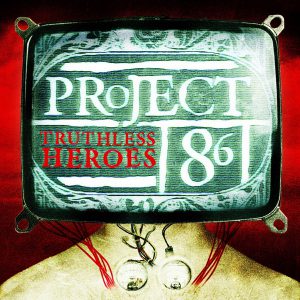 With the release of Wait For the Siren on the horizon, let’s take a look in the rearview at one of Project 86’s best records to date, Truthless Heroes.  The band’s third album found them in a dark place lyrically and offered no sort of hope or encouragement to their listeners.  What it did offer, however, was an impressive expedition of hard rock.  Each track was an all-out assault of “angry” hard rock music and the band never relented.

The record attacked the media, big business, and entertainment and did its best to expose the grisly truth and hypocrisy behind them.  In doing so, Andrew Schwab “told the story” of a fictional character that was neglected as a child and attempted to pursue greatness through fame, fortune, and lust.  Schwab warned back then that the album didn’t necessarily have a happy ending.

Though lyrically dark, as a whole it was a hard-hitting record.  Not only has Truthless Heroes reigned supreme as my personal favorite P86 album of all time, it is also one of their most accessible to date.  The tracks that really make this such a memorable album have to be “Little Green Men”, “Salem’s Suburbs”, “Team Black”, and “Another Boredom Movement”.  While there isn’t a track that misses, “Another Boredom Movement” is probably the album’s best as it calls out the music and entertainment industry in audacious fashion.

Project’s newest album, Wait For the Siren (releasing August 21st), definitely has shades of their 2002 release.  Much of the angst in the vocals from Heroes is revisited, but lyrically it’s more uplifting.  Not one song from 2002 holds a flame to the hope that’s in Siren’s almost worshipful “Blood Moon”.  While there are definite and direct comparisons between Truthless Heroes and Wait For the Siren they are completely different albums all around.  I like the way our own John DiBiase put it: “It’s a fresh album for P86, but with just enough Heroes, Bridges, and Picket Fence to have the best of both worlds.”

It’s hard to believe that it’s been ten years since Truthless Heroes hit the market, and maybe even a little harder to believe that Project 86 has been around for nearly seventeen years.  Schwab is the only remaining original member, but does anything else really matter that much?  Schwab has always surrounded himself with capable musicians and his song writing is always top notch.  One listen to Wait For the Siren will take you back to the Truthless Heroes days of “angry” P86 music.  While the newest effort isn’t dark like its predecessor from ten years prior, it may have just unseeded Truthless Heroes from my top spot.  Do yourself a favor and do some listening to Truthless Heroes before delving into the new material.

“The Sacrifice of the Cross” by John DiBiase