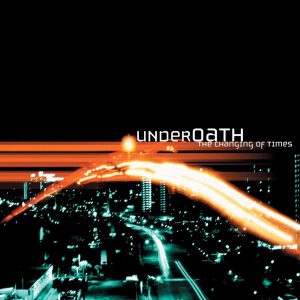 I think it to be highly appropriate to write a blog like this about a band who has recently announced their break up, simultaneously breaking the hearts of many music fans (though with all the understanding in the world from said fans).

Ten years ago, one of the best things that has ever happened to heavy music happened: a band called Underoath signed to Solid State Records and released what would be their grand introduction to the world at large, The Changing of Times.  The album captivated the hearts of kids who couldn’t decide if they were emo or hardcore, giving them a third option: emocore.  This was in large part due to the duality of Underoath’s music.  Before The Changing of Times, Underoath was hard and heavy, but with the signing to Solid State, and with drummer Aaron Gillespie’s poppier preferences starting to influence the music, their sound became more ambient.  Dallas Taylor (who went on after this album to form Maylene and the Sons of Disaster and is also part of a two-man electronic outfit called Everett) still screamed a lot in songs like “Letting Go of Tonight” and “Never Meant To Break Your Heart,” the latter of which also kept some of their hardcore tendencies intact, with double bass and chugging guitars.  But then there’s the title track and, of course, the infamous first single “When The Sun Sleeps” (the single that made it known that these guys were something special), which expertly blended their harder side and their newfound softer side.  While the majority of the album wasn’t very accessible, it paved the way for their groundbreaking follow-up record, They’re Only Chasing Safety (but that’s a blog for a couple of years from now!).  These guys have done a lot in the way of making Christian music more likeable for those of other (or no) faiths, and they grew and matured and made heavy music better with each and every album.

As we say goodbye to Underoath, go back and listen to the album that really gave them their biggest push toward being legendary.

“That Our Home May Be a Praise” by Josh Taylor