As a parent, I’ve learned that one of my favorite things to do is to give our son gifts. If he likes something, I really enjoy getting him little gifts or toys related to that subject. It’s just fun for both of us. Since he’s been born, apparently that’s a favorite pastime of our parents too, as Will has acquired many toys and fun stuff since he was born. (And we are being buried alive in them, but that’s another story).

So, I got a text from my wife Amy today who took Will to the mall for a hair cut. She had promised to take him to a pet store to see the fish tanks in which one of them has a tank ornament that is a jellyfish. It just so happens that our little 3-and-a-half-year-old is a big fan of jellyfish and almost anything else aquatic. Up until this visit, that particular tank ornament was not for sale.

But now it is.

Amy’s text asked me if she can get it for Will because he really, really wants it. She adds that it’s $20. My first reaction is that we usually just get him what he wants if it’s cool and harmless and inexpensive. (And honestly, I’ve blown $20 plenty of times on, um… “office desk ornaments”.) But we’ve been broke-as-a-joke lately, so I just came out with a flat “No” first.

She then sends me this photo: 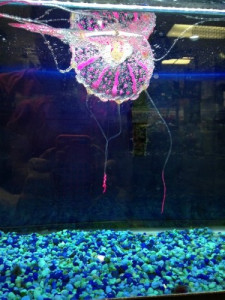 Sure, that looks kinda cool, but… is it really suitable for a 3 year old to play with? And how durable is it outside of a fish tank? And he actually already has a plush jellyfish… So I stuck to my guns and said no again.

I get another text from her. It’s this photo: 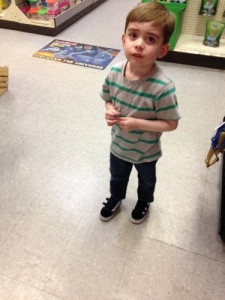 With the caption “Poor thing… I wish you were here.” (The photo still wrenches my heart even as I type this)

And she had a good point. It’s one thing to say “no” over text message and another to tell the child to their face. It wasn’t easy for me to do, but between the two of us, it was easier for me to not have to actually deal with a sad little cutie face. I tried to bargain with him through her, telling her to tell him I recently got him a new little [cheaper] LEGO spaceship for us all to play together (which he wanted for us to do recently), and Amy bravely left the mall without the fishy figurine.

When I saw him later, he begged me to go to the store to buy it for him, but I told him it’s too expensive and he already has jellyfish (and tons of other fun stuff) to play with. He has since mostly let it go, and… guess what… we’re all still alive!

I’m sure God can relate to us being persistent and stubborn children who ask for things and expect to always get our way, but while it wouldn’t have killed us to buy that item for him, I just felt like it was a lot of money to spend on something that he didn’t NEED, wasn’t even really a toy, and we really shouldn’t be spending money on at the moment (and, without it, live does go on, the Earth still spins, Oreos still taste delicious, etc). Plus I do think it’s important to not just get our children EVERYthing they want just because they want it. It can’t be healthy.

But I’ll tell ya this… it’s a super hard thing to do and I do wish, as a parent, we could give them all the desires of their little hearts. But God knows that’s just not always the best or even right thing.

“If I could change one thing about you, I wouldn’t.” by Josh Taylor