I think one thing that has stalled updates on this site is the self-inflicted “pressure” of blogs or articles needing to feel entertaining enough to read. Most bloggers take this approach but what I think I’d like to do instead is…

You see, our little 2 year old has been a little slow at learning to talk but he’s been picking up more and more words now quite speedily. He can say the most heartbreaking (and oddly high-voiced) “Buh-bye!!” when you’re leaving and a little “hi” … When he feels like it. He also loves the word “cookie” and often commands “More!… More!More!More!” when one cartoon ends and he wants another to begin.

What Will doesn’t do much of… Is string words together in a sentence or short phrase.

On Thursday, January 10 (2013), my mom was packing up the little man for a visit to her house (from our house) — and for a much needed date night for Amy and I — when I plopped him into his car seat in her car and said goodbye. I kissed his cheek a few times and said bye and he muttered a couple “Buh-bye!’s” before turning away and saying “Buh-bye Daddy!”

Tonight (the 11th), Amy was picking up his train collection as he ran around the living room, and she told him to “say night night to your trains!”

It’s a more recent thing that he calls me Daddy–and I love it– and on Christmas Eve, his present to me was another “first” for him.

I was standing in the outer sink room of Amy’s parents’ bathroom, washing my hands, when he simply walked in, said “Hi Daddy” and left.

He has only done that once more to this day and it was the following morning on Christmas Day while I was in my office. So awesome.

It’s so neat to see these little “baby steps”…
– John 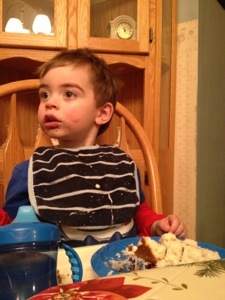 “I Don’t Listen To The Words, Just The Music”