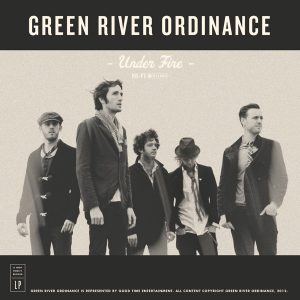 Texas’ Green River Ordinance is a band with compelling music and an equally compelling story. Signed by Virgin Records and releasing an album of well received and tuneful pop-rock a few years ago, the band walked away from the deal to go out on their own and call the shots, including embracing issues like human trafficking and the recovery of the Gulf Coast from the BP oil spill. All of this would just be an interesting side note if the music on Under Fire were not compelling, and (spoiler alert) it is. A long (by industry standards) and satisfying slice of guitar rock and southern harmonies, Under Fire is worth every penny, and a worthy addition to your playlist for this upcomming summer and any road trips you might have planned. Recommended highly for fans of Needtobreathe’s southern harmonies and Switchfoot’s epic and thoughtful guitar rock.
– Alex Caldwell

Our synopsis: “Funding the record themselves through Kickstarter allowed Green River Ordinance to throw everything into the skillet over the course of fifteen songs; the country music influences, the modern guitar rock, the worship element and cook up a gumbo that is just right…and that makes for a great story indeed..” (Recommended by JFH’s Alex “Tincan” Caldwell)
Song Highlights: “The epic title track “Under Fire”, the worshipful and gosple-choir backed “Resting Hour”, the romantic “Heart Of Me” and the encouraging “New Day”

So, what are your thoughts on and experiences with the album Under Fire? Do you recommend it? If so, why?

“Flasback: Off to the Hospital. First Triage?” by Amy DiBiase

Ten of John DiBiase’s Top Favorite Songs of All Time