Our son Will is now 2 years and 9 months old. In recent months, his language development has accelerated considerably, which has been exciting for my wife and I to watch. He frequently surprises us with random movie quotes or repeating things we say… which brings no shortage of amusement to us.

This summer we’ve even taken him to the movie theater twice, too. His first movie experience was the re-release of Finding Nemo late last year, but even at 2 years old, he didn’t really seem to take in what was happening. But he did mostly stare at the gigantic screen the entire time.

In recent months, we were shocked to find that he absolutely LOVES Monsters, Inc. – the original. I expected it to terrify him, so I didn’t show it to him for quite a while, but when I showed him part of it, because it contained a scene that involved a toy he loves, he just loved the film. So we took him to see Monsters University which he seemed to really enjoy. (Our theater lets kids in free under 3! Woohoo! 🙂 ) We sat off to the side in a section by ourselves and tried to keep him as quiet as possible. He couldn’t resist roaring along with the characters a few times though.

Then, recently I showed him Despicable Me, thinking “if he can handle Monsters and The Incredibles, this kid can handle the escapades of Gru and his minions.” Sure enough, because this kid is absolutely, positively infatuated with the moon, he loved Despicable Me — especially the scenes involving the moon and rockets. (I tell you, this kid is instinctively nerdy and in love with sci-fi). So we took him to see Despicable Me 2 last week, and he was already getting excited about the concept of ‘going to the movies.’ He clapped a couple times during the movie, although sitting for an hour and a half was a little daunting for him. As we left the theater, he saw a motion poster that displayed the preview for Planes and he excitedly pointed to the poster and exclaimed “Movie!! Movie!!” The apple does not fall too far from the tree.

Last night, we took him to a family party that took place partially outside in a beautifully landscaped backyard. He was playing a little with his second cousins, who were all older than him, and when the fireflies started coming out — and those and mosquitoes decided to interact with him — he looked upset and asked to go inside. While the other kids didn’t seem to mind the bugs much, it was pretty funny to me to hear my son speaking my thoughts on insects (although, granted, I was more outdoorsy as a little kid than I am now as an adult. I’ll take AC and a pad and pencil over a ball and 90 degree heat any day of the week).

The past week has been full of other new experiences, too – including Will’s first real toddler-age experiences with vomiting. He’s had a stomach bug (so it seems) and some struggle 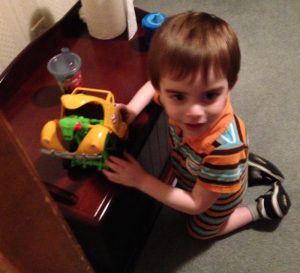 with congestion for days and we’ve had to start dealing with some surprise refunds on stuff he’s eaten lately. He’s also started just straight-up spitting out food that he decides he either doesn’t want or doesn’t like, which has even been happening with foods he normally DOES like. So that’s been curious. But there’s one thing that’s for sure – kids keep you on your toes! 🙂

One of my favorite experiences with him lately, however, was taking him to my parents house to dig out some of my old toys. My dad and I went up into his garage attic and brought down boxes and boxes of my brother’s and my old 80s toys — Transformers, LEGOs, PlayDoh, The Real Ghostbusters, G.I. Joe. Will kept grabbing whatever looked cool to him and running into the other room to claim them as his own (I had to keep saying, “No Will! That’s Uncle Joe’s!” I mean, c’mon… the original Galvatron? I was tempted to grab it for myself!). For me, it was a trip down memory lane, and fun to see Will interact with things I spent many a happy hour playing with. I boxed up some of the best stuff and took it home with me for when he’s old enough, but Will claimed for himself my Real Ghostbusters Highway Haunter – a Volkswagen beetle that literally turns into a bug. It’s pretty cool and I can see why he loves it so much.

In fact, recently I’d snagged the Real Ghostbusters Ecto 1 car on eBay for him and it’s quickly become one of his favorite toys. It’s crazy, too, because the only association he has for things like Ecto 1 is that his dad loves it.

Again, it must be in the genes 😉 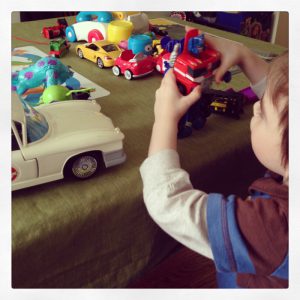 We Recommend: Blindside, “About A Burning Fire”