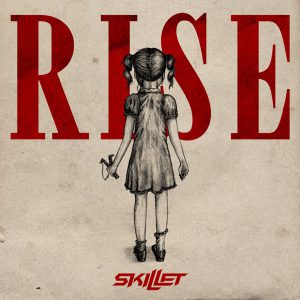 Yes, I was reflecting on Skillet‘s Rise.

In particular, there was one commenter that stood out among the dozens of people that voiced their… thoughts… on the record and on the two reviews. I perused all of the comments and saw that this person had asked the same question no fewer than five times in his various posts and comments, in defense of the criticisms against an album that he obviously held in a much higher esteem than the reviews did.

“What were people supposed to expect?”

That got me thinking; how much do our expectations shape what our thoughts of an album are? I could expand the question to encompass even more of the philosophical landscape of life beyond music, but for sake of simplicity and length, I’ll leave it at that. Take Skillet as the prime example: to most fans, Rise was either the third or fourth (or, if they were really late to the bandwagon, only the second) Skillet album that they had heard. They knew Skillet as a modern symphonic rock band geared mostly towards difficult problems and life situations of youths and comforting them with nostalgia and encouragement, sometimes even directing their worries and fears towards God. So, of course, they would expect Rise to sound like that! And since they became fans during that era of Skillet’s life, they were obviously fans of that “sound” for one reason or another, and so their excitement was directed towards a Skillet album that had generally similar themes (which Rise did). So the final result is an album that, with a little variance here and there and without doing anything too unexpected, satiated the appetites of their biggest fan base (much to the chagrin of the “original panheads” that grumbled about Skillet retreading old ground from Collide and Comatose in Awake and Rise).

But what if Skillet would have made some drastic changes? What if they felt that they wanted to stretch themselves musically and personally? What if they went against all expectations to make the piece of art that they truly felt led to make? What if they would have made a Project 86-like hard rock album instead? Or, what if they made an Anberlin-like alt-rock album? Or they went the Relient K route and made a random pop album? Or a rap album? Or metal? Or folk? That would have surely put a damper in the expectations of those fans, wouldn’t it? Especially if their voyage into new territory resulted in floundering. Would any fans buy that album? Would they even still be a fan? Well, many might, but I think most would feel like they had been “betrayed” and leave the bandwagon.

But here is the kicker: what if Skillet had made drastic changes and the resulting album was simply phenomenal? Profound lyrics (if there were any at all). Completely original. Impeccable musicianship. A complete masterpiece in every respect, and far superior to anything they had ever done before. But would the fan reaction be any different?

Maybe some critics would recognize that album for what it is, but the critics have their expectations too. They can feel betrayed too. Same with record labels and others in the music business. The fans and critics and businessmen that recognize the brilliance of the album will stay. The rest will probably move on to things that are more… profitable… in some way, shape, or form. It doesn’t matter in the end what the final product is if expectations are not met. In the music business, it is dangerous not to meet them, and can even mean financial suicide. It is the reason why people like Adam Young can take his dazzling project Owl City and turn it into just another pop act. Or why artists like Sanctus Real and Hawk Nelson are now inevitably pigeonholed into one melting pot of contemporary sound. Or even, conversely, why so many more artists nowadays are leaving record labels and record deals and going independent.

So what do we expect bands like Skillet to do?

Make an album that the fans are satisfied with. That is the bottom line. In many cases, particularly with a band as popular as Skillet, it is even the only line. The fact is that so much of music criticism nowadays is simply judging how well a band or album or song met, exceeded, or failed to live up to expectations. I’m guilty of it, and I doubt there is even one person on the JFH staff that also isn’t at one time or another.

But it ought not to be this way. The fans don’t own the music. Record labels don’t make the music. The artists are fully accountable for what they make. There is a reason musicians are called “artists” in the first place; they make art. Art does not include expectations. Expectations are what originally caused Stryper to lose popularity and break up. Art does not include money. Rich Mullins’ worldly possessions after he died fit into 80 cubic feet. Good art has a value far beyond money or expectations. Van Gogh sold only one painting in his lifetime. Mozart died penniless and was buried in an unmarked mass grave. Larry Norman didn’t even have an audience for his music!

At JFH, we try to make it our sole expectation of the artists we review to make great art with creative integrity. We therefore judge and critique music in that light. We believe that by making great art for God, the artists are giving greater glory to God than by simply making something that is merely marketed to glorify God. Yes, these artists are making their living through music. Yes, the songs can potentially be ministry tools, or help someone personally get closer to God. We don’t judge that. We can’t judge that. If we expect anything else from the artists we review, we will not be fair to the artistic integrity of either that particular artist or other artists.

So what do we expect Skillet to do? Or Relient K? Or Casting Crowns? Or Chris Tomlin? Or For Today? Or (insert your favorite artist name here)? We expect them to make great art with creative integrity, whatever that may look like for that particular artist. And if we don’t think they did, it will be adequately reflected as such.

We Recommend: Holland, “Photographs and Tidalwaves”