The consumption of music has changed immensely in 20 years. In early 1996, I remember hearing new music from Audio Adrenaline and Newsboys in tiny snippets on their new websites on the internet–which was a surreal and entirely new way of hearing music at the time. I remember hearing how raw and edgy the music 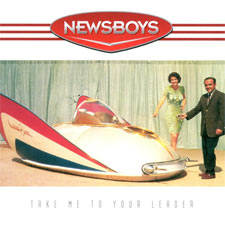 sounded from both bands and getting really excited for what was ahead.

On Tuesday, February 20th, 1996, I remember going to my favorite local Christian bookstore to pick up copies of both Audio Adrenaline‘s “bloOm” and Newsboys‘ “Take Me To Your Leader.” I also remember getting my hands on a free “Take Me To Your Leader” promo poster from the music section of the store and standing on my bed to hang it in on the wall in my room while listening to these albums (on the stereo on my desk) for the very first time.

Not only were these two very popular Christian musci acts that you could hear singles from on the radio, but they were rock bands. And it was a time when the music–at least to this writer–felt gritty and real, and lyrically visceral. A song like “Lost The Plot” from Newsboys was not a typical song you’d hear from a band like them — and especially not now. Co-written by the band’s drummer and co-vocalist Peter Furler and producer Steve Taylor (who currently fronts Steve Taylor & The Perfect Foil with Furler as the band’s drummer), the song was a clever rock ballad about the complacency of many believers… something that’s far too relevant today still. Check out a portion of the lyrics here (and the full song lyrics here):

Lies.
Let’s be blunt.
We’re a little unfaithful.
What do you want?

Are you still listenin’,
‘Cause we’re obviously not.
We’ve forgotten our first love.
We have lost the plot.

And why are You still calling?
You forgave, we forgot.
We’re such experts at stalling
That we’ve lost the plot.

There’s still new music today that releases that’s worth curling up on your bed and listening to while pouring over liner notes and digging into the music deeply, but it’s a rarity–not only because music has changed so much (and the politics of how it’s created and released), but because the WAY we consume music has changed so

much too. We’re less likely these days to have a musical product to hold in our hands to immerse ourselves in, considering how we can just instantly download the music to our phone, mp3 player, computer, etc at midnight on release day morning instead of having to wait to get to a store to grab a CD, cassette, vinyl, etc.

But, two decades later, I think these two albums have held up tremendously well. Unfortunately, Audio Adrenaline is virtually no more, existing mostly in-name-only with all new members and a more contemporary/worship sound (Original vocalist Mark Stuart had to quit due to vocal ailments), and Newsboys sound immensely different with DC Talk’s Michael Tait on vocals (and there being a much greater focus on worship songs), while the rest of the members in the current band were present for “Take Me To Your Leader.” Music production has also changed dramatically, with these albums displaying little imperfections and sound changes that wouldn’t make through a pass in ProTools these days (You can actually hear the volume shift lower near the end of Newsboys’ “God Is Not A Secret”). Even the structure of how albums were created and laid out has changed dramatically. Due to musical vendors like iTunes where you can buy just one song from any given album, labels and bands have had to rethink songwriting to try to write each song as singles.

These albums most certainly hold a special place in this reviewer’s heart, especially since they were significant chapters in the soundtrack of my teenage years. And they’re excellent albums to revisit to this day.

Do you own either of these historic records? Sound off with your favorite songs and memories below! We’d love to hear about them.

A Look At The Lyrics Of Jon Foreman, Part 1

We Recommend: Maylene and the Sons of Disaster, “II”

We Recommend: Kari Jobe, “Where I Find You”