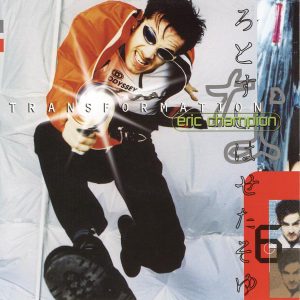 As we continue to look back at the music that released when JFH was founded 25 years ago in 1996, an album that I often still come back to is Eric Champion‘s self-reinvention album, Transformation. (I think the very first iteration of JFH even had an image of Eric from this album’s photo shoot as the site’s splash page!)

Starting out as a soulful electronic pop artist with his self-titled album in 1990, it seemed completely schizophrenic for Eric Champion to suddenly release a really funky rock album 7 years later.

After his fifth studio album (in as many years) with Myrrh – an underrated almost Matrix-story-style concept album called Vertical Reality in 1994 – he made the label shift to Essential Records where his Transformation would be born.

From the album imagery – which featured a no longer clean-shaven Champion sporting a toy laser gun pointed right at the listener – to the live-instrument featured rock sound that replaced the R&B driven pop sound of his previous work, Eric Champion reemerged like a brand new artist.

The album’s lead-off track, “Dress Me Up,” was also the album’s first music video (see below). And the artist, who previously toured with the latest and greatest in CCM pop and adult contemporary, was now touring with rock bands Guardian and Imagine This (both of whom were also in the midst of significant stylistic changes, too). Like with most of Champion’s work, he was a bit ahead of his time. The title track, “Transformation” was a blistering rock song that boasted an infectious, chunky bass line, a blend of sci-fi and futuristic sound effects, and a delicious live drum sound to create a truly unique soundscape. The album then pumps the brakes right away for the acoustic ballad “Lifeform” as its third track, which continues to utilize a crisp live instrument sound, and another quasi-ballad in “What’s in a Name,” which starts slow but builds to a rousing finish.

The edgier tracks then continue with the fun and funky anthemic rocker “Higher,” followed by another prime highlight in “Sparkle in Your Beat” – which is a funky rock song that continues an intriguing use of electronic effects mixed in with the gritty instrumentation. “Droppin’ Nova” slows things down a bit, but keeps it groovy while singing about shining the light of Christ to the world. Things then turn quite dark for the angsty anti-lust anthem, “Temptannie” (Gotta love that rocking chorus that’s perfectly simple yet effective.) “Falling” ironically picks things up again, but keeps the attitude established on the previous track, which also continues through the rest of the album with a punk-flavored take on Amy Grant’s “Every Heartbeat” and the dark finale, “Until I Get My Way.” The closer mixes violent imagery about how you can do pretty much anything to him (boil him in oil, shoot him in the heart, use a guillotine to “separate” his “head,” feed him to a cat, etc), but he’ll keep singing regardless, and continue to “do what He wants me to do.”

In our current musical climate where church worship music reigns supreme in the Christian music industry, Eric Champion’s Transformation is a great example of Christian music that mixes creativity with message and a hearty dose of eccentricity. It lyrically celebrates the new life we find in Christ while also addressing the rejection of temptation and trying to live boldly for Him.

Eric Champion’s Transformation is an album well worth revisiting time and time again, and still sounds great two-and-a-half decades after its release. “Christmas Music – Our Favorites and What’s New!” by John DiBiase