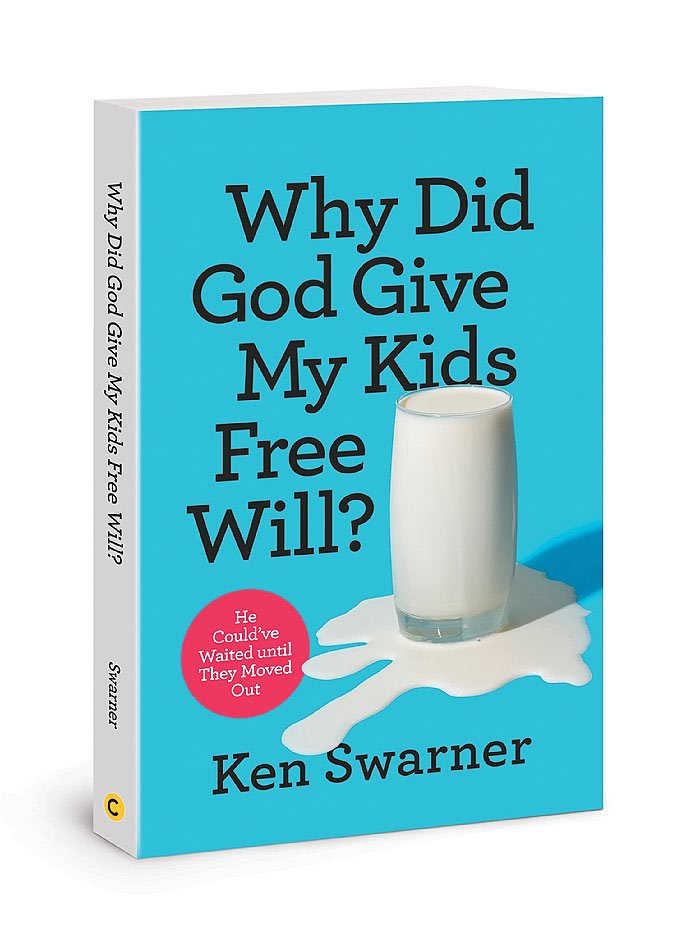 For Immediate Release (Tacoma, WA) — A recent Barna survey revealed that 73% of U.S. parents are concerned about their children’s spiritual development. The survey also showed a majority (58%) of non-Christian parents are interested in ensuring their children have a healthy relationship with spirituality. In his latest book, “Why Did God Give My Kids Free Will?: He Could’ve Waited Until They Moved Out,” Ken Swarner uses his trademark humor along with real-life lessons from his own experiences as a father to help parents navigate the most difficult parts of raising children.

“When my daughter was younger, she wanted to take her Hula Hair Barbie to school for show-and-tell,” says Swarner. “During my daughter’s presentation, a schoolmate asked, ‘What do you like best about Hula Hair Barbie?’ ‘That’s easy,’ my sweet, little, innocent child replied. To demonstrate, my daughter reached up, ripped off Barbie’s coconut bikini top, pointed at the plastic bumps, and said, ‘Oh, I like these!’ That was the year I was PTA president of the school. To be a parent takes a lot of humility. There are days I feel like if someone made a television show about our family around the dinner table it would be called Dad’s About To Have An Aneurysm . But writing about those moments and reliving them for all the world to read, helps me realize how God probably gets just as frustrated with me as I sometimes do with my kids.”

Swarner readily admits to finding fatherhood daunting, but he also understands the difference a father can make in their families.

“A few years ago, there was a research study that showed the importance of fathers being the spiritual leader of the family,” says Swarner. “The study showed that if mom goes to church regularly, but dad attends only every so often, only 3.4 percent of children in that environment will grow up to be regular churchgoers. But if dad goes to church all the time and mom never goes, 44 percent of kids will grow up to become regular churchgoers. I learned that the hard way as a father when I neglected to require my older kids to attend church when they were in high school. I have since mended my ways, but I now know it is the responsibility of a Christian father to get his family to church and be the spiritual leader.”

Though Swarner uses funny stories from his family life, he includes serious reflections, scripture verses to ponder, as well as specific prayers at the end of each chapter. Swarner hopes his book will help parents know they are not alone in their struggles.

“I hope the book encourages parents to stop judging themselves for not attaining perfection in their parenting, because, as we know, only God is perfect,” says Swarner. “It is our job to love our children unconditionally, and model what it means to be a good Christian adult. Our children were given free will by God, and He created them to be the stewards He wanted. We should trust God in this, and instead of trying to control our kids, we should have faith that our Lord has their back—just like He has ours. Readers will also see things aren’t so bad in their own homes when they see the chaos in mine.”

Ken Swarner is president of The Ranger Publishing Company, Inc., and wrote the syndicated column, The Family Man. In his previous book, “Whose Kids Are These Anyway?,” he was lauded by Publisher’s Weekly as “finding humor in any parental situation.” He has served as a school board member, PTA president, Cub Master, and soccer coach. He was named to the Civilian Hall of Fame at Joint Base Lewis-McChord, one of the nation’s largest Army bases, where he developed programs to support soldiers and their families during the Iraq and Afghanistan wars. He received his B.A. in Communication from the University of Washington and has been married to his high school sweetheart for thirty-three years and counting while raising four children and three pets. For more information visit www.KenSwarner.com .

“Seek Him Expectantly” by J.M. Farro