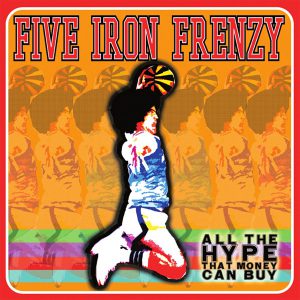 I hated this CD the first time I heard it.  I became a Christian in late 2000, and for Christmas that year, a family in my church that knew of my recent conversion got me a Christian music sampler called Simply Impossible, containing bands like Philmore, The Normals, The Elms and Five Iron Frenzy‘s song “Solidarity”.  An odd choice from the album, because being new to Christian music, I initially thought FIF might have been a salsa band.  A friend of mine let me borrow All The Hype…, and I learned they were ska.  I loved ska, but I hated that CD for some reason.  After some time (and a few more listens to it on a road trip one night), I discoverd the brilliance of Five Iron Frenzy.  Almost every song on All The Hype… is a gem.  From the worshipful skacore jam “World Without End” to the anti-hatred anthem “Fahrenheit,” there’s not much to not like here.  The band may have passed on, but the music is still golden.  If you haven’t checked this one out, it’s not too late.  Just look on eBay or Amazon.  Even iTunes has it now.  And while you’re there, it wouldn’t hurt to buy all their other albums too, you know.
– Scott Fryberger

Five Iron Frenzy
All the Hype That Money Can Buy (2000)

Our synopsis: “A disc full of fun songs, mixed with songs of faith and love as well, all set to a genre that died before it should have.” (Recommended by JFH’s Scott Fryberger)
Perfect For: Godly love, humor and mullets
Song Highlights: “The Greatest Story Ever Told,” “The Phantom Mullet,” “Ugly Day,” “Fahrenheit,” “Giants,” “All The Hype,” “World Without End”

So, what are your thoughts on and experiences with the album All the Hype That Money Can Buy? Do you recommend it? If so, why?

“Ask God for Something Tangible” by J.M. Farro

“Divine Increase for You and Your Children” by J.M. Farro