At a recent visit of my parents’ house, I grabbed three boxes of “forgotten” items from my old bedroom closet (which is now my mother’s office) and decided to take them home and go through them. Of course, it’s not that I NEED more stuff at my house or have even really missed this stuff, but I knew it didn’t belong taking up space in my parents’ HQ and I was rather curious as to the contents of these three boxes.

Perhaps the pending fatherhood (which is any day now, quite literally!) is increasing my already sentimental tendencies, but I’ve always been one to save things that have meant something to me in some form or another — from receipts gathered on family vacations to an assortment of animal-shaped pencil erasers and even high school class schedules. My old bedroom was often a walk-in scrapbook of my life… something that has slowly spilled over onto my current home office walls in my own house.

Tonight I rifled through old papers… birthday cars from family and friends… scrapbooks I maintained when I was around 8 thru 13 years old… early to mid 90’s copies of CCM Magazine… old keepsake boxes… cassette tapes and Walkman… some art supplies… coloring books… and even a few notes from friendships long past. A lot of the cards from people I don’t remember or have lost permanent touch with found their way into the recycled paper pile, along with miscellaneous class papers or keepsakes. Some moments were ones that I probably cherished then and have since buried deep within the recess of an adult mind prone to regularly dwelling on much grander matters (like my firstborn)… but in all honesty, I think my deep appreciation for the things I loved as a child, and still do, is part of a way to still cling to my original humanity which has been threatened by a tenacious work ethic.

So my thoughts gravitated to little Will… what kind of classes or interests might he have? Would he dig some of these old Disney comic books if I decide to set them aside? Will he have to endure quite as many heartaches that young life and love tend to bring? Will he keep just as much junk as I have? Will the same kinds of things matter to him that have mattered to me throughout my years? …. Will he be quite as sentimentally insane as I am?

I’ve found sentimentality to be a rarity among guys… and often a plague upon myself to have to do battle with throughout my years. I’m marginally proud of myself for being able to quickly and coldly part with some old items, but I found myself still succumbing to the urge to keep some old college class schedules, Creation 98 and Kingdom Bound 97 programs… and piles of other “rubbish.” Perhaps the little dude will be interested in what I was up to back then? Perhaps not? It’s kind of fun to ponder what he’ll be like and grow up to be as we grow closer and closer (and closer!) to his great reveal! 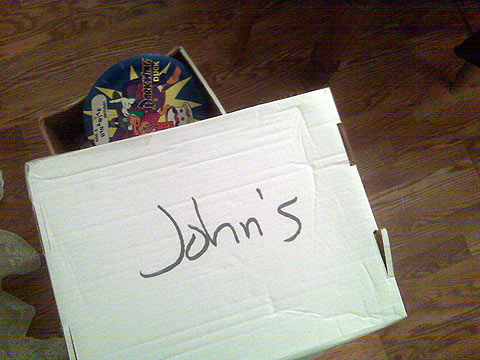 “Sign Us Up for Those Pee-Pee TeePee’s! (AKA Spoiler Alert)” by John DiBiase