In many ways, Thrive marked the end of a chapter of the Newsboys story. It was the last album of all-original material that the classic Take Me To Your Leader lineup would make together (sans John James, of course). After Thrive, the lads from Australia (well, mostly) would go on to make a few worship albums (with some pretty good original songs) trade guitarists, bassists and singers and somehow maintain a popularity that still allows them to sell out arenas, as evidenced by the boisterous crowd heard in the background of this month’s live release, Newsboys Live In Concert: God’s Not Dead. 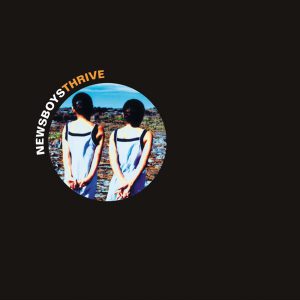 Produced by longtime team of Steve Taylor and Peter Furler, Thrive opens with the bouncy guitar crunch and clever wordplay of “Giving It Over”, which name-checks rap group Outkast (hugely popular at the time) and features some fantastic Taylor lyrics about surrendering everything over to the Lord. Second song, “Live In Stereo,” is perhaps the only song in Christian Music to combine references to a “Jacobean ladder,” the Blue Man Group and a sherpa. This odd mix is pure Steve Taylor at his nonsensical best and harkens back to the odd and wonderful wordplay of 90’s Newsboys albums Going Public (with its screwball lyrics on “Shine” about dictators who repent and “teach the poor origami“) and Take Me To Your Leader where “Joshua judges her ruthlessly” on the title track. Taylor again is the unsung hero (and true sixth member) of the Newsboys and on the back half of Thrive (“Cornelius”, “The Fad Of The Land” and “John Woo”), he achieves a level of cultural commentary that goes beyond “the world is bad, think about Heaven”. Indeed, an engaged mind, surveying popular culture and bringing a kingdom perspective to John Woo movies is a feat that needs to be remembered and celebrated. It would be fascinating to see what Steve Taylor could do with the Newsboys’ current incarnation.

And in an interesting turn, Thrive offered up Furler’s first attempt at a corporate worship song (not counting the worshipful songs on their greatest hits album two years prior, they were not corporate worship in the strictest sense) in the catchy “It Is You.” The success of this tune lead to a couple of worship albums that were to follow.

It’s the combining of fun and encouraging radio songs like “Million Pieces (Kissing Your Cares Away)” and “Thrive” with oddball, but endearing lyrics that this version of the Newsboys shined most. The goodwill produced by a string of albums like Thrive no doubt helped the fellows survive the lineup and music industry changes that were just around the corner.