Most nights when Will goes to sleep, I leave his room to finish work in my office in the next room, or retreat to my Fortress of Solitude in the basement for some much needed downtime. Often times, Amy will fall asleep in Will’s room while reading him a story or because she’s just too tired to get out of the room (she actually has a sleeping disorder called “narcolepsy” which doesn’t help).

Last night, Amy and I left his room and I went into my office while she went to sleep for the night. But most nights, she keeps Will’s baby video monitor by her side so she can be up and at his aid in a heartbeat. This time, however, she forgot it.

Shortly after we all went our separate ways, so to speak, I hear Will in his room repeatedly saying, “It’s spooky!”

We’d just got done re-watching Frozen not long before bedtime, and he’s genuinely frightened of the snow beast in the movie. Oddly enough, he likes it and is terrified of it at the same time. (He even stomped around the room and pretended to BE it).

After several instances of “It’s SPOOOO-KEEE!”, I went in his room and asked him what was wrong. He repeated that it was spooky, so I rubbed his back and asked what was spooky. I asked if it was the snow monster and he said yes, but then said something about a big bug.

Maybe he had a nightmare, maybe it’s just his imagination, but I have no idea what big bug could be vexing the poor little guy. So I assured him we’re here to keep him safe and that he can go back to sleep.

I closed the door to his room and I hear him repeat that it’s spooky, so I opened his door and looked at him and he smiled.

OK, I guess he’s just having fun with me. I repeated that little exercise (opening the door to him saying it was spooky again) a couple times and then said “Goodnight” and closed the door.

I returned to my desk and then heard him talking to himself. This time, it quickly escalated into soft sobs and whimpering and calling for “Mommy”.

I popped up off my chair and opened the door and he sat up clutching his blankets to his mouth and sort of rocking back and forth a little bit. I asked him what was wrong and he wouldn’t speak.

So I did what any clueless parent might do… I asked if he’d like me to read him a story.

He quickly said “Yes” and laid back down, so I went over to his book shelf and rummaged through the collection. “No… nah… nope…” None of them sounded interesting… to me.

Then I found a Garfield book. Eureka! Something I was given to by a college friend who knew I was a big Garfield buff.

“Garfield to the Rescue!” 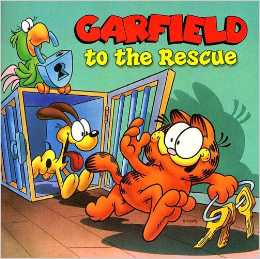 A hero story? Perfect! So I start reading this thing to him… and it turns out to be about this guy called “The Petman” who kidnaps pets and cages them up in a warehouse… and he has a big menacing Doberman dog to guard the place.

What the heck did I pick? I ended up trying to read it with a lightness in my voice that the story didn’t offer, and changed words like “menacing” and “Doberman” to “ugly” and “dog”. Will didn’t react to it at all, actually, so I assumed the story still went over surprisingly well.

After it was over, I offered to read one more story, and grabbed the far lighter “Goodnight, My Duckling.” He sat up to look at the board book pages and excitedly followed along with the simplistic (and so simple it was almost insulting) book that he seemed to have (easily) memorized. After it was over (which was in about 5 seconds), I assured him that we were here in the house to keep him safe and I’d be next door in the office if he needed me. 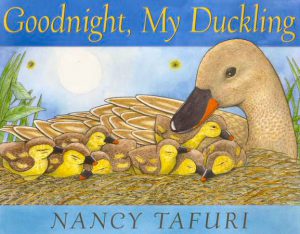 He then laid back down and soon fell asleep. While I feel bad for the little guy for having a rough night (after what was a rough day), it was heartwarming to get to share these moments with him.

“Out of print downloads” by Scott Fryberger

Songs For When You Feel The World Is Broken: Alex ‘Tin Can’ Caldwell’s Top Albums Of 2018