Seth here. Sitting here next to a guinea pig. I took a picture of him. His name is Bill. I just named him that. Look at his picture. Isn’t he cute?

We just finished playing a killer show in Las Vegas. Night 11 of the Nothing and Everything Tour. Probably the best crowd so far! Nothing like 600 people screaming along with “Losers”.  🙂 Also, I should mention that this town has the world’s biggest In & Out Burger, which Me in Motion highly recommends to anybody and everybody.

So before we went onstage, we discovered that Bill lives in our dressing room. He has a little cage with a large paper towel tube to go inside and hide in, a bowl of delicious-looking rodent treats,  a water dispenser and some sawdust for his bed. Must be a pretty simple life! Some days, I find myself wishing that my life was low-key, like Bill’s. No drama, no worries, no stress. Just eating, walking around, and sleeping. He has about the safest life I could imagine. Until of course, our road manager, Josh went and picked him up and put him inside this little clear plastic ball for him to roll around on the ground in. He was definitely was scared out of his mind, if he has one. I wish for this story’s sake, I could say that he overcame his fear of being outside the cage, and rolled all the way out the door, down the hallway, outside, and escaped out into the great outdoors where he could live truly free!!

But no, he sat there, even when we tried to roll him around. He was totally sold on only living his little rodent life in the cage, and that must be good enough for him!

This whole thing reminded me of a new song that we wrote called “The God I Know”, which is coming out on our new record in March. It talks about how living a Christian life is a life modeled after Jesus, who lived any way but safe and secure. He hung out with the lowest of the low, walked the slums with the losers, turned the tables in the temple, and proved His radical love for us on a cross.

I know sometimes it’s easy to be content staying in our little bubbles that we so often retreat to, just like the little guinea pig in his cage, ignoring the world outside. But this isn’t how we were created to live. We were made to live radical lives, like Jesus. Not just for the sake of “shock factor”, but for the sake of showing true love, Jesus’ love to people who don’t deserve it, and who does after all?

Read this verse I found, which I think is an amazing example of this life that we are called to live, a life that goes the opposite way of the world. Let these words inspire us to think deeper about the kind of life we’re living right now. 🙂

Be sure to welcome strangers into your home. By doing this, some people have welcomed angels as guests, without even knowing it. Hebrews 13:2 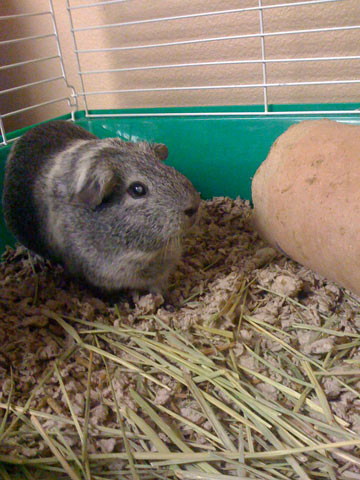 “Prayer over the iPod? Oh yeah!” by MIKESCHAIR’s Sam Tinnesz

“Most Dreams Die a Slow Death” by Chris Taylor

“This Gift is Forever” by Charles F. Stanley

“Success, Love, and the Meaning of Life” by Wavorly’s Matt Lott