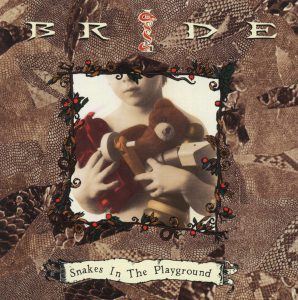 I’m going old school once again this week. Some of the younger Christian music fans probably have never even heard of Bride, but in the early 90’s, the band was one of your best sources for metal music. With a beautiful wail from lead vocalist Dale Thompson that could shatter the windows of a Dunkin Donuts two towns over (OK, maybe that’s an exaggeration), Bride delivered some incredible live performances (stay to the very end of that video) as well as some fantastic songs. While it’s a little tough to choose an album to recommend first, the band’s most popular record was undoubtedly their 1992 release Snakes in the Playground, and for good reason. Metallica fans may take to their 1994 release Scarecrow Messiah, but Snakes… kind of had a little bit of everything – without a bad track in the bunch. From a couple power ballads that ought to make John Cooper smile, to some serious rockers like “Would You Die For Me” and “Dust Through A Fan,” Snakes… is a solid and memorable 90’s metal album. – John DiBiase (JFH President/Editor)

Bride
Snakes In The Playground (1992)

Our synopsis: “One of the best metal albums of the 90’s that should still appease fans of the genre today, Bride’s Snakes in the Playground is a modern classic.” (Recommended by JFH’s John DiBiase)
Perfect For: Bold faith, Spiritual Encouragement
Song Highlights: “Rattlesnake,” “Would You Die For Me,” “Dust Through A Fan,” “I Miss The Rain,” “Love Money,” “Goodbye”

So, what are your thoughts on and experiences with the album Snakes In the Playground? Do you recommend it? If so, why?

“Learning to Walk” by John DiBiase

“Fact or Fiction: How Good Is House of Heroes?” by Josh Taylor

We Recommend: Jars Of Clay, “Much Afraid”