I marvel at my three year old daughter! I don’t know from where she gets some of her amazing qualities. She’s so unlike me in so many ways and I wish to be more like her in many ways.

We’re often seen at our neighborhood park at least several times a week. Little Miss Social Butterfly is devastated if there are no other children at the playground. Often she’ll just say, “Let’s go home, mama.” But today in particular there were at least five or six other children within her age range. She was in her glory!

There she was, my fairest of the fair beauty (we’re talking nearly white towhead, blue eyes and fair skin) with out so much as another thought playing with other children that don’t look even a speck like her! She makes it look so easy to talk to people she’s never met before. “Hi! My name is Lillie! And I’m here! Do you want to play?”

Meanwhile, I push the stroller carrying my other nearly one year old daughter to a nearby bench and seclude myself in the comfort of its loneliness. Really, it’s just an excuse, if I’m totally honest to not interact with the other parents. My mind wanders: well, they don’t know me, what if they think I’m weird for talking to them, their table looks too full and I would just make it crowded, what if they think I’m some stuck up white person, the dad is smoking-don’t want Evie to be around that, what if I have nothing to say, I have nothing to give back anyway… I totally defeated myself without even starting! I settle into the bench and check out Facebook on my iPhone. Great, now I just look like a parent that doesn’t even care what their kid is doing. And that’s so not me! I’m just, well, uncomfortable approaching someone I don’t know. It’s not natural for me. Makes my skin crawl just thinking about it.

And it’s not that I’m antisocial. I love to have conversations with people I don’t know, but I’m more comfortable when others pursue me. There’s Lillie again, “Mama, can I have a Popsicle?” Sure, honey. One of the other parents went to the store for Popsicles and handed them out to all the kids. She easily asks the mom if she may have one too, a purple one. Gold star, baby, for good manners! The mom smiles sweetly at her and hands her a purple Popsicle. All the kids sit together at the now very crowded picnic table and chat about only things Preschoolers and toddlers find interesting. Later they share chips and Hawaiian punch.

And I just watch. And I’m proud of her. I remind myself that this is all she knows. She’s always lived in the city with all its beautifully colored people. I, on the other hand, grew up rurally in an almost totally pasty white community. I feel so out of place here, so plain, so vanilla, so boring!

As I survey Lillie playing “run around tag” with her new friends, laughing gleefully, I’m reminded that this is what it’s supposed to look like!

Whoever Becomes Simple Again
1 At about the same time, the disciples came to Jesus asking, “Who gets the highest rank in God’s kingdom?”

2-5 For an answer Jesus called over a child, whom he stood in the middle of the room, and said, “I’m telling you, once and for all, that unless you return to square one and start over like children, you’re not even going to get a look at the kingdom, let alone get in. Whoever becomes simple and elemental again, like this child, will rank high in God’s kingdom. What’s more, when you receive the childlike on my account, it’s the same as receiving me. 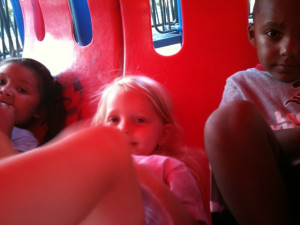 “Discomfort Inn” by Me In Motion