Day Three: Will’s second full day, our third in the hospital. (Check out his arrival blog and the follow-up if you haven’t yet!)

I went home on Saturday night after a terrible sleepless night the night before in hopes to get some honest to goodness refreshing sleep. So after sleeping like a rock, I freshened up and darted back to the hospital. A good friend of ours had come to visit (“Fellow Brave Parent” Kinsey – one of my dearest friends from high school) and she proceeded to accompany me to the NICU to catch a glimpse of little William in action.

Upon arrival to the NICU, Will was being attended to and the nurse on duty offered to let me hold the little guy. So, since his debut on Friday PM into Saturday AM, I’d really only held the little guy for about 2 minutes. This was my first time getting some real quality time with the guy since he entered the world.

I sat down and held Will close. I now could see his little bluish eyes that blinked often and rolled around in sleepiness and hunger. His “binkie” was used often to keep him as content as possible, but for the most part, Dad got to get some quality time with Son for the first time. Kinsey snapped a couple shots of us in the moment (see one below!) 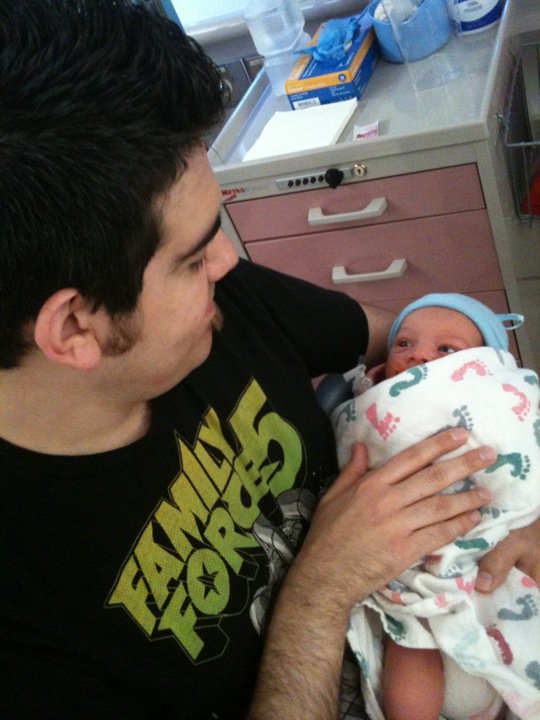 Later in the day, Amy and I returned to see Will and she was able to nurse him naturally for the very first time — and successfully! It was quite bizarre but wonderful.

Then, some time after 9pm, we returned to the NICU one last time for the night while another nurse had just finished feeding him via bottle and offered to let us hold him. Amy and I took turns for a little bit before she handed him entirely over to me while she went back to her room to attend to her new, regularly scheduled nursing duties.

Will slept like a champ! He slept the entire time I held him. As I’ve said before, I have zero newborn experience, but what I’ve always assumed from newborns is that they show very little expression and just sleep, eat, and cry a lot. I couldn’t have been more wrong. To watch little Will sleep so peacefully was really an incredible sight. Aside from regularly flipping his arms out as a reflex while he slept (which was cute in and of itself), I witnessed all kinds of facial expressions I wouldn’t expect to see on a baby’s second full day at life (he wasn’t even officially 2 days old yet!). He would often smack his little lips, pulling in his lower lip, then pushing it out. I saw him give the perfect Han Solo smirk at one point, and raise his bald eyebrows a few times. He sneezed at least once while sleeping, and I saw him open his mouth in a feeding manner at another time (and yawn too of course). He even broken into a full-on cry for literally about 2 seconds — never opening his eyes — and returned back to his content, peaceful sleep state. Despite fidgeting from time to time, making tiny grunts or other assorted infant noises, and having the uncontrollable arm reflexes, the little guy remained asleep… even as Amy and I had passed him back and forth and even when she put him back down in his NICU bed. It was also the longest amount of time I’ve see the little guy without his “binkie” in his mouth!

What an enlightening day! 🙂 Now… if we could only take the little dude home!

(Health wise, he’s improving despite still having some rapid breathing and the pneumothorax, so we can’t take him home yet… stay tuned!) 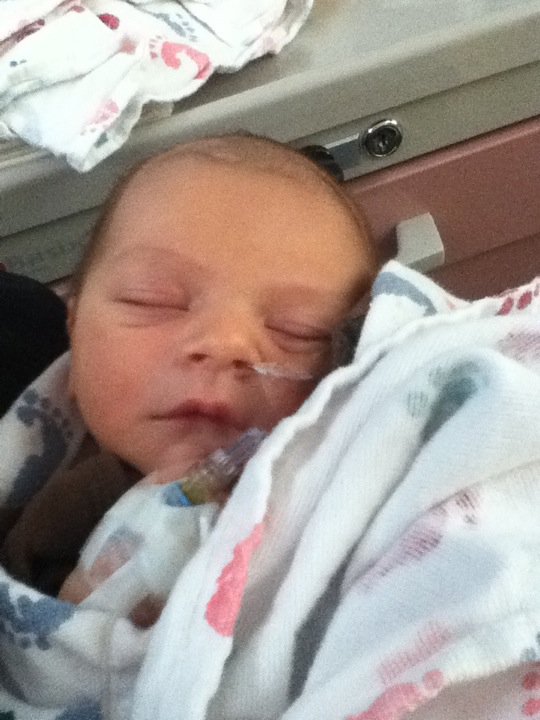 NEW: ‘We Recommend’ …The Blog!