As mentioned last night, our darling little guy, Will, was delivered unto the world at just before the stroke of midnight on October 1st. Among the clamor of nurses and doctor trying to prep Will for life on this great big screwy planetary rock, were murmurs about Will’s breathing condition. It seemed that our little noobie to Earth living was experiencing some serious rapid breathing that was concerning the med specialists. I picked up on the tone, but crossed my proverbial fingers in hopes that it was just momentary.

After William was cleaned up, passed on to his mother, and then handed down to his father, who was in a state of shock no doubt, he was handed back to the nurses and whisked away to the nursery. Instead of getting him back for holding, a new nurse came in to inform us that he looked great but he was using his abdomen for breathing, and much too rapidly. They had to relocate him from the nursery to the baby ICU (AKA “The NICU”) and wheeled him into our room in this clear box perched atop a cart and let Amy hold him again briefly.

“Do you want to hold him?” my wife asked me.

Of course I did, but she couldn’t have just been holding him for more than a minute or two when she offered for me to hold him. I told her to keep holding him. I figured I’d get another chance in a moment. I would certainly think she’s earned her time with him now.

After a few more seconds, the nurse reached for Will and Amy handed him over… to be returned to the box. He was so peacefully wrapped up in a blanket like those ole Playskool Glowworms and I was intrigued about this new little life that somehow grew inside my wife’s midsection for the past 9 (LONG) months. But once he was returned to the box, they invited me to walk with them down to the NICU, so I followed them.

Upon arriving to the unit, the comfortably bundled little Will was plucked from the comfort of the little bun warmer and unwrapped on a table. Intense crying ensued.

I’m surprised they didn’t hear the sound of my heart cracking.

I’m no baby softee. To say that is no issue of pride or anything, I’ve just never been a baby person. But this little guy had made eye contact with me earlier in the night and now, only a couple of hours outside of the comfort of his mother’s natural oven, he is being manhandled by strangers in just a diaper for all the surrounding new world to see. Such helplessness! It’s a tough thing for me to wrap my thick-headed noggin around the concept that this little dude is my son! My son! And he’s crying! Uncontrollably! He’s upset and I can’t do a thing about it! It felt like one of those awkward cinematic moments where a character is left alone with a baby without a clue of what to do with them… except, that is, I wasn’t ALONE with him. But I sure was clueless.

Later that morning, I wheeled Amy down to the NICU for us to see our little Glowworm again, but he was just lying on the table in nothing but a diaper. A few hours later, when we’d see him again, he was all snugly wrapped up in a white basket-like robe with a built-in visor to block out some light. Because Amy is an RN at that very hospital, she exchanged some info with the doctor on duty there who was explaining to us just what is up with him and what could be the problem. Terms like pneumothorax were tossed around — apparently meaning he had some air pockets in his chest where there shouldn’t be any, and his white blood cell count was higher than they should be. Then the words “spinal tap” were mentioned a few times. Amy even had to sign a consent form to allow them to give him one if it was deemed necessary. Whoa. But since I barely understand most of the medical speak that they spoke, it’s tough to give an educated account of all they said.

When the day grew longer, we heard some good news that he was progressing, his blood count was looking better, he probably wouldn’t need a spinal tap, and some x-rays might help diagnose the issue. But he still wasn’t in tip-top shape.

It’s an interesting way to begin our parental experiences. Please join us in prayer that he’ll have a speedy recovery and be able to be released into our personal care soon! Much to Amy’s joy, they did, thankfully, let her hold the boy wonder a bit this evening. So I suppose that’s also progress! 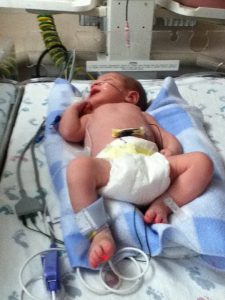 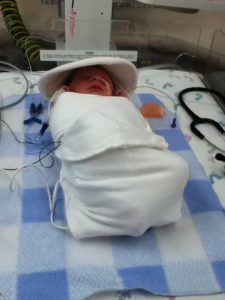