It’s been awhile since my last entry, but that doesn’t mean there haven’t been several new adventures for us.

First, Amy and I finally got away for a weekend this month to Orlando. I mixed business with vacation, but it worked well to get us some time to just “us” again. We surprisingly snapped right back into how it felt to be just the two of us again, and it reminded me how much I’ve missed that. When you’re married for seven years before a baby is born — not to mention have been “together” for five years before tying the knot (that’s 12 years total for those keeping track) — it’s tough to add a third party and adjust to that. Frankly, I’ve learned just how terrible I am with change and I’ve found myself clinging to my favorite things more. However, I think that’s when God decides we need to let go and cling to Him. To say I need help adjusting to change is an understatement. Prayers are welcome. 🙂

We did miss Will while we were away, but I coveted those hours as just the two of us. It’s tough to juggle spouse time, parenthood time, and our respective jobs; I find that the one that suffers most is the spousal time. So if you’re entering into the parenthood adventure, make sure you two make plenty of time for yourselves, too. 🙂 It’s important for your individual sanities (and hearts) and it’s good for your marriage.

So the week after our Orlando trip, we ran a merch table for JFH at a music festival in PA called Uprise. I was also working as media, so it was a super hectic weekend, but still quite enjoyable. Amy came along for the whole weekend and decided to bring Will along too. It was nice to have the whole trio intact, but it’s not easy to take care of a 11.5-month old while manning a merch table at a fairgrounds.

On Friday night, we stayed over at a hotel nearby and thus marked our first hotel experience with an infant. Mind you, I had feared this could be a disaster, and in my eyes, it was. 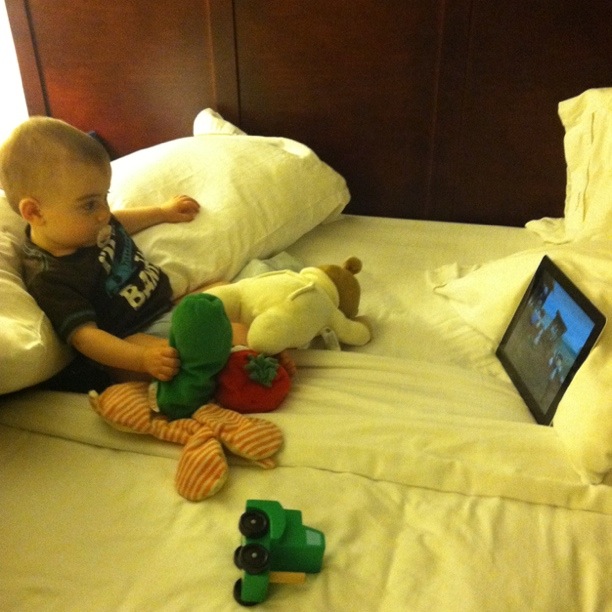 At first, it was neat. We settled in, got a complimentary crib delivered to our room and let Will chill on our bed to watch VeggieTales as we got ready for bed (and I had some work to take care of first). It was a challenge getting him to fall asleep, and keeping him from wailing in protest was part of that challenge. Finally, though, he was asleep, then Amy was asleep, and when I finished my work, we were all able to get some rest.

This was probably around 2 or 3am by the time I tucked myself in.

At roughly 6am, we awoke to the blood-curdling cries of our darling baby boy. Amy tried to calm him (he always prefers her over me… I don’t have the magical touch and if Amy’s there, he wants her over me, which is fine), but could barely get him to stop freaking out. After about 20 minutes or so, Amy frustratingly took him to the bathroom and started the tub water. Here, I assumed she’s planning on giving him a bath to calm him. I hear the bottle warmer beep on, so I knew she was about to give that a shot. All the while, Will continued to scream and cry. I knew I could try to go in there and offer assistance, but Heaven knows I’d just be in the way (and the decibels would do me in). Meanwhile, I’m trying desperately to relax and finding myself just getting jittery as I listen to his nonsensical screams of discontent (I was about ready to join him). Things only worsened, so I took the liberty of dressing and retreating to the hotel lobby. I was bleary-eyed and afraid the day ahead would be unkind with the lack of sleep I would be having. I was able to calm myself while slouching in a lobby armchair and listening to some worship music, but I wasn’t able to fall back to sleep. About an hour or so later, I got a text from Amy that he was asleep in his crib and that I could come back upstairs. I did, and I was able to sleep a tiny bit longer before we had to get up and get ready to go back to the festival.

I know I don’t win any husband-of-the-year awards with that story, but we’ve learned over the past year what I can handle and what Amy can handle is vastly different. She’s considerably stronger than I am when it comes to patience with a baby whose screams can strip the flesh off your ear drums (or… seemingly mine, at least).

Lesson learned? Infants and hotels don’t mix. Write that down.

We Recommend: Leeland, “The Great Awakening”