As November 1st marks exactly one month since we ventured into the world of parenthood, it’s intriguing to look back on the past four weeks to see how much life has changed.

On Friday night, Will was officially four weeks old, and on Saturday night, my parents volunteered to assume the role of babysitters to allow Amy and I to hit the streets as just the two of us… for the first time since we brought the little beastie home from the hospital.

The past few weeks have been rough for both of us. Amy’s nursing him, so that’s been exhausting for her. I’ve been learning patience. Will is most likely colicky, which causes him to scream and cry A LOT… we’re talking nearly every time he’s changed, every time he’s hungry, every time he’s tired… every time he’s awake. But we do get glorious little breathers from his hissy-fits where he’s wide-eyed and content (but it doesn’t last) or he’s sleeping peacefully… flashing blissful grins from time to time. I’ve learned my limits with his crying, although I’m frequently trying to stretch those limits so I don’t fizzle out and become useless.

But to say we needed some time to ourselves has been an understatement. Longtime parents may scoff at our need to get out after 1 month, but the truth is, we’re quite used to the childless freedoms of a relationship. We dated for 5 years before getting married, and the wedding day was over seven years ago… so, for over 12 years we’ve been accustomed to doing our own thing and having alone time… something our relationship has thrived on.

But with this whole “babysitting” thing, despite my parents’ insistence on how much they WANT to babysit, I can’t shake feeling guilty for leaving the little monster with ANYone while we go have fun… so we decided to share the dinner time of our “date night” with my folks before leaving them with the peanut and then going out to the movies as just me and Amy (something we used to do quite often as a couple).

But here’s where LIFE AS WE NOW KNOW IT threatened to kill our first date night (well, since October 1st’s birth of parenthood). For starters, after a nice dinner at Chili’s with my family – including the little fusspot – we had to run across the street to Babies R Us for some nursing supplies. The movie was at 8:20 and it was now around 7:35. Amy got what she needed at the store and we rushed home… insisting Will needed to be fed a bit before we left for the movie. We arrived home around 7:50 and I knew we’d need to leave around 8:05 if we wanted to see the whole movie. Amy insisted that feeding him “would only take 10 minutes.” Sadly, I knew this wasn’t true. At 8:18 – two minutes until start time – Amy was ready to leave. We were still in our kitchen when I groaned about how late we were, shoulders slumped, and glanced at the clock on our stove. By the time we got to the theater, it was almost 8:40. We know previews run for almost 20 minutes, but I was stressing about us missing some of the movie. Granted, I’d already seen it (on a Dad-and-son outing with my Dad), but I really wanted to see it again and for Amy to see it too — I knew she’d enjoy it. So I dropped her off at the front of the theater and told her to get her ticket and go right inside and that I’d meet her. She wanted a Slushie, so I said I’d get it before I came in.

So then I tried to park.

And of course, there were no spaces within a reasonable distance to the front of the theater. So here I am, jogging through the parking lot at around 8:45, I get to the front of the theater, buy a ticket at the ticket machine, and head to the concessions counter. I hear one guy who was tending to a couple people tell someone who wasn’t doing anything to open a register. The reluctant teen walks to an open register and announces to the masses that he was now open. I believe I was the only person there at all. I went over to him and asked for a small soda, then proudly presented a coupon for a free medium popcorn that I knew expired that day.

“Oh… see, that coupon not only expires TODAY, but it’s only good from Sunday thru Thursday.”

And then I ordered Amy’s Slushie. He rings me up and hands me Amy’s drink and the popcorn… but no soda. I’m anxious to get to the movie.

…..”What about the soda?”
“Oh! Oh… I forgot the soda.”
Then he just stares at me as I reach for it.
“I forgot the soda…”
I think him saying it again means I just got me a free soda!
Then he adds, “That’ll be $4.00”
Ugh. Seriously? So I give him my card again. As he’s ringing it up, I grab the bag of popcorn, and get slimed. I look at the kernels on top… they’re clearly greasy.

“Did you put butter on this?” I asked.
“No, I don’t think so.”
“Well, you did…”
“Oh man, I’m sorry. This has been a terrible transaction!”
I went over to get my straws while he got me a fresh bag of popcorn (and it looked fuller than the last one). I grabbed it and headed for the ticket-tearing booth and I handed the girl my ticket after a couple young teens walked inside.

I turned around and walked across the lobby to the other side of the theater, carrying my high calorie goodies. I hand my ticket to the ticket-tearing girl there. She too looked at the ticket confused. She slowly tore it and handed it back to me. I then proceeded on through… not knowing what theater to go to! I see theater 16… but it’s the wrong movie. Could they have changed the movie name for that theater already, but it’s the right movie inside?? I walked in to find… nope. This was the wrong movie indeed. I exited and trudged down the hall, scoping out the marquee for each theater. NONE of them were the right one. As I turned around and moved back towards the girl who tore my ticket, I realized there was ONE last theater I had yet to check… and it had been immediately to the right of me after she tore my ticket. I had looked at my stub to find that it not only didn’t tell me what theater I was supposed to be in, but it had strange writing all over it informing me that my movie had already started and that I should go see the box office. Whatever.

I finally found the theater, huffed, called myself a moron, and entered. At the end of the ramp into the theater where it opens to the stadium-style seating, I found my wife standing there, a grin spread across her face, watching the opening of the movie. She’d decided to wait for me since the theater was full. We waited a few minutes and then found a few seats a bit too close and a bit too far to the right (and in a prime trafficked area), but we’d sat down and were finally settled in. Sure it was off to quite a rocky start, but these two war torn parental newbies were getting their date night. It was all good. 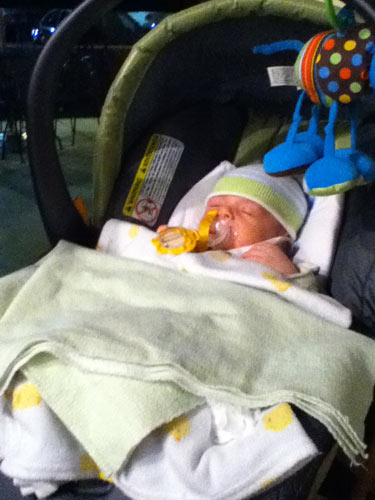 Will asleep next to our table in Chili’s

“To Spin or Not to Spin” by John DiBiase

California Breakfast in a Glass