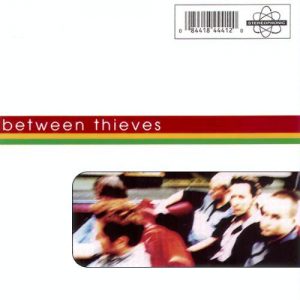 I’m going to go out on a limb here, as I usually do with these recommendations, and feature a little known project by a band called Between Thieves. I often find myself recommending music on here that would be deemed fairly old (maybe even out-dated), but I think part of the bonus of this recommendation blog series is to encourage people to check out good music that has been long forgotten.

In 1997, the now long-defunct record label Tattoo Records released the self-titled debut album from Between Thieves. It was an unashamedly pop rock effort with boldly faith-filled lyrics that often bordered on being worship music before there was really a modern worship movement. The opener “Despite The Rain” is an excellent, encouraging song about fighting feelings of guilt and focusing on joy and freedom in Christ. It’s one of those albums that really reached into my soul as a teenager and related to the tough times while also injecting a lot of hope — it kind of brought light to those painful times and encouraged the listener to refocus their viewpoint away from themselves and onto Jesus. “Kindle” was another wonderful track pleading the Lord to “kindle the flame and rake the coals, purify my inner soul.” and “Consuming fire in my life, let the spirit take control. It’s finally time I realize that I am not my own.” “Now” is another gem that follows in a similar fashion while “To The End” addresses sticking to our convictions and not slipping from them despite outward influences. “Take My Hand” is a lovely song about a couple becoming one through marriage and uniting with Christ. Amy and I actually used it as our wedding song. It’s not a conventional, over-used song you normally hear at weddings, which was also pretty appealing (and I think its rock ballad style is more fitting for me). Finally, one of my favorite songs of all time is the closer, titled “Privately.” It clocks in at just over seven minutes in length and is an electronic-glazed soft rock song that addresses loneliness and the inability to shake it sometimes. But Between Thieves, like with each song, brings the focus back to Christ in the final verse, “Refuge for my spirit, catch my silent tears / Speak to my heart, oh Father with words I cannot hear.”

The band’s follow-up and, consequently, final album, Water, wasn’t quite as good or memorable, but their self-titled debut is one that has stuck with me and I expect it to be one I’ll continue to return to from time to time for many more years…  – John DiBiase

So, what are your thoughts on and experiences with the album Between Thieves? Do you recommend it? If so, why?

“The Death of Rock” by Michael Weaver

We Recommend: Hoi Polloi, “Happy Ever After”