Over the weekend, I had the pleasure of taking part in the conspiracy that was a surprise baby shower for my wife, Amy – marking shower #3  (the first was in Nashville with our friends there and the second was with my family in NJ since my grandmother can’t travel much these days), as Amy’s family, friends, and coworkers bestowed baby-related blessings upon the mommy-to-be.

Amy’s due Oct. 4, but everyone makes it a point to draw attention to just how pronounced her “baby bump” has gotten. She had a check-up Monday morning of this week (the day after the shower) with a new doctor who gave her an update on how things are going. When she told the doctor that she’d be seeing him next Tuesday, he commented that it probably would be sooner than that…. meaning that little William is looking to make his debut potentially as early as a month ahead of schedule. The little guy’s dad (that’s me, for those of you getting lost here) was also considerably earlier than intended when he was a newborn, so if Will decides to make a September debut… well… like father, like son! (that is, he’d be early. I wasn’t born in September…)

As we get down to the wire, the tyke’s bedroom is getting further primed and ready. As mentioned in previous blogs, his room was originally our “spare room” which had become home to concert photos I’ve taken and a few music-related posters. So where a huge, autographed Audio Adrenaline poster (from 1994) once hung, now displays an arch-shaped myriad of Toy Story wall decals (disguising the framed poster’s nail hole and scratch marks)… further cementing the boy’s room as his. It’s coming along quite nicely… and, if things continue the way they’re going… he’s likely to be napping in there in either a few weeks… or a few days! 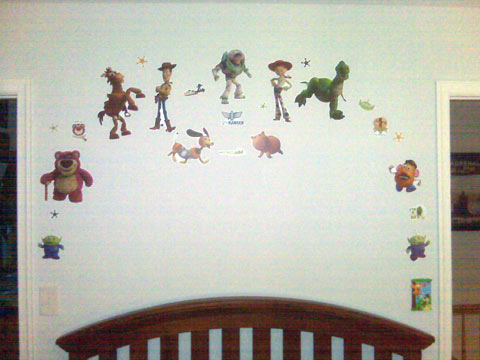 “When We Have To Say ‘No'” by John DiBiase