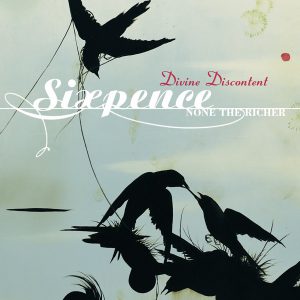 As the August 7th release date for Sixpence None The Richer‘s long-delayed brand new album Lost In Transition is upon us, it’s got me thinking over the band’s history of music making. A decade ago, in 2002, Sixpence released their last non-seasonal full-length studio album, entitled Divine Discontent. Don’t let the bleak title fool you though; there’s a pop airyness to this record that makes songs like “Breathe Your Name” (which you may still hear on mainstream radio from time to time), “Tonight” and their cover of “Don’t Dream It’s Over” fun songs to listen to. But fans of the melancholy artsy-ness of Sixpence None The Richer will soak up songs like “Down and Out of Time,” “Still Burning” and one of my all-time favorite songs by any artist, “A Million Parachutes.” Let’s not forget “Dizzy,” a song that likens God’s shaping of us to being clay being molded by His hands, spinning on a potter’s wheel. Divine Discontent is a beautiful, diverse collection of artful pop that still sounds wonderful ten years later. Check it out before picking up Lost In Transition on August 7th!

Sixpence None The Richer
Divine Discontent (2002)

So, what are your thoughts on and experiences with the album Divine Discontent? Do you recommend it? If so, why?

“Power and Wisdom from Christ” by J.M. Farro

“100 Greatest Christian Albums of the 90s” by Josh Balogh

“Pregnancy and the Electric Slide” by Amy DiBiase