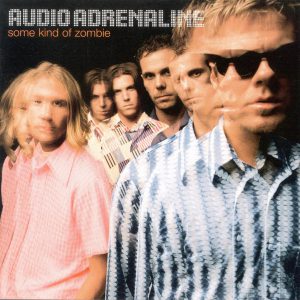 It’s hard to believe that it has been 14 years since Audio Adrenaline released their hardest rock effort, Some Kind of Zombie.  With all of the great music that Mark Stuart and company released over the years, Zombie seems to be a forgotten jewel.  After a recent listen (actually two), I was reminded how great the album really was.  Audio A strayed from the 70s feel of Bloom and went to a more modern alt/rock feel.

Though there were only ten tracks on the album, most of them strike gold.  “Chevette,” “Original Species,” and “Some Kind of Zombie” are easily favorites, but where the album gets really good is with the Supertones backed “Blitz.”  I still remember them playing the song live together while touring for the album.  That show remains one of my favorites to this very day.  “God Shaped Hole” also remains one of the band’s greatest songs in their long and illustrious career.

While it was sad to see Audio Adrenaline say “adios,” it’s nice to be able to listen to their older material and smile.  Zombie still holds up to today’s standards for good alt/rock music.  If you overlooked this album in the 90’s because of the greatness of Bloom and Underdog, give it a listen now; I promise you will not be disappointed.  Though it’s not their most popular by far, it is easily one of their best.

Audio Adrenaline
Some Kind of Zombie (1997)

Our synopsis: “One of the best alt/rock albums of the 90’s from one of the top Christian rock bands of all time.” (Recommended by JFH’s Michael Weaver)
Perfect For: Faith, love, and Godly living
Song Highlights: “Chevette”, “Original Species”, “Blitz”, “Lighthouse”, “God Shaped Hole”

So, what are your thoughts on and experiences with the album Some Kind of Zombie? Do you recommend it? If so, why?