Twenty one (and almost a half) months!

While it’s been a few months since my last blog, these weeks in between posts have been anything but dull. Watching Will develop has been quite the site, as he’s a walking, running, toddling babbler. He doesn’t really speak much yet, although he’s starting to mimic certain sounds (“Up” and “Bob” — as in the Tomato — are his most common ones. But it sounds like I might be “Gah-gah” to him 🙂 ). It’s funny to watch him conduct his learning in a manner that’s … very much on his own terms. It’s almost as though he knows how to say certain words… he just doesn’t feellike it!

And that personality development has certainly been an interesting one to experience. Little tantrums are “fun” to endure and try to learn how to subdue. But we know the importance of getting the little booger to calm down and learn that smacking anything within his proximity (from people to objects) is unacceptable. 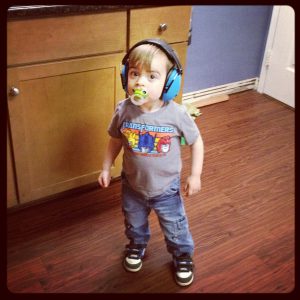 At an acoustic Copperlily concert 6.4.12

Almost everyday reveals something new with him. Today, it was watching him grab a Buzz Lightyear figure (which is… *ahem* mine….) and pretend that Buzz was flying! I’d yet to see him play like that. He loves watching the Toy Story trilogy, so it’s great to see him gravitate toward the characters. When he got his mitts on both Buzz and Woody figures, he carried them around for quite a while — like little trophies! Sometimes he still gets into these fits of throwing things — even things he really likes — so he’s still learning what it means to take care of peoples’ things. I know this stuff takes time.

But it’s also just AMAZING how fast he’s growing! It doesn’t seem long ago that he couldn’t roll over… then couldn’t crawl… then couldn’t walk… I’m sure, once he starts really talking, I’ll feel the same way about this season when he couldn’t!

So until the next adventure… 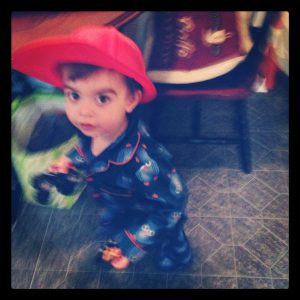 7.12.12 – running around the kitchen with a Firehouse Subs hat on