To fully understand my choice in highlighting Tree63, I must delve a little bit into my background. 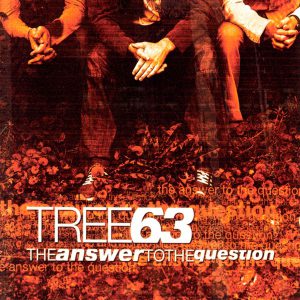 In my youth, my interest (and exposure) to music was rather limited. I had been weaned on Rich Mullins, dabbled in the sounds of Steven Curtis Chapman, and been bored during church worship; that was pretty much it. As my brother was flourishing in his musical tastes (he had already started his collection of Jars of Clay material, ironically much to my annoyance), I found the whole thing uninteresting. Then a DVD extra on Jonah: A VeggieTales Movie introduced me to the Newsboys sometime soon after my 12th birthday in September 2003 (I had received that movie as a gift on that occasion). This started a massive chain reaction that fully awakened my interest in music. By December 2004, I had compiled a long list of firsts, including my first album purchased with my own money (Newsboys’ Thrive), my first dud purchased with my own money (Newsboys’ Devotion), my first Christian Rock album (Kutless’ Sea of Faces), my first worship album (Chris Tomlin’s Arriving), my first real favorite song (“Jesus Freak”), my first time listening to a band that was popular outside of “Christian” circles (Switchfoot), and so on.

But there was one more notable first which was more subtle, but far more meaningful: the first time I began to truly enjoy worshipping God through music. I can’t pinpoint it to a day (though I think it may have been at camp), but I can pinpoint it to a song: “Blessed Be Your Name.”

The Answer To The Question, the third Inpop release of South Africa’s Tree63, was actually a CD that belonged to my brother, but I also really enjoyed it. It was an energetic pop-rock album that I could unashamedly sing along to and delve into the meaning of the words (2004 was also the first time I started doing that, as I began growing acutely aware that some music was “Christian” and some was “not”). To this day, I get goosebumps (even if only from nostalgia) listening to album opener “King,” a song which definitely holds up as strongly today as it did then. “You Only” and “So Glad” were also favorites of mine, as was (of course) the South African trio’s cover of Matt Redman’s “Blessed Be Your Name.” I still remember to this day, for the first time ever, hearing the worship band play the opening chords of that song, and singing the opening verse, thinking that it sounded familiar (but couldn’t figure out where), and then suddenly realizing, “Hey, I listen to this song at home!” As a 12-year old, this was a really big deal for me; for the first time, worship became more interesting, and I wanted to pour myself more into it.

In all reality, I can’t really say that there is anything “special,” per say, about The Answer To The Question. Obviously, their version of Redman’s classic has basically become the industry standard to this day (though, frankly, it is actually one of the weaker songs on the record), but all The Answer… really is is a solid pop-rock/worship album from a now-defunct band (the band ended in 2009 after one more studio album). That said, it does wonderfully capture the best of this era of the evolution of CCM, bridging the genre from the days of PFR and Seven Day Jesus and the rise of Sonicflood to the popular “worship music” movement of today. But to me personally, it captures this era of my life and my growth personally and spiritually. I’ll admit that I hadn’t listened to The Answer… for a couple of years until I was preparing to write this blog, but when I did, everything rushed back to me as clearly now as it did then. I remember all the songs, and they arguably hold up better now than, say, this year’s Passion release will hold up a year from now. Those that haven’t listened to Tree63’s finest album, I recommend you do so, and if you have, give it another listen.

“When A Music Video Makes You A Fan” by John DiBiase

10 Years Later: Relient K, “The Anatomy of the Tongue in Cheek”

“That Our Home May Be a Praise” by Josh Taylor