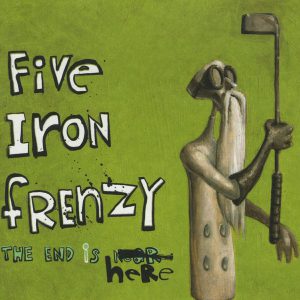 When it comes to Five Iron Frenzy, I was about as late-blooming of a fan as you can possibly get. My experience with them was as follows:

I started going to church in the year 2000, and along with my newfound interest in Jesus, I was given some Christian music to listen to (because secular music was a sin, right?). For Christmas that year, the family that was bringing me to church gave me this compilation called Simply Impossible, which featured bands like Skillet, John Reuben, Earthsuit, ill harmonics, PAX217, The Elms, Philmore, and an interesting choice of song by Five Iron Frenzy (“Solidarity”). The song caught my interest, mainly because I found it interesting that there was a Christian salsa band on this compilation. Well, I got a chance to listen to All The Hype That Money Can Buy, and realized that was the only song of that nature on the album. They were a ska band! And I hated the entire album. Yep. I hated it.

Time went by, and I heard a few other songs by Five Iron that weren’t so bad. Then on a road trip with a couple friends, someone popped in that CD, and it was like it was something completely new. Every song was simply amazing. How could this be? I don’t know, but something had changed, and I liked it. Then in early 2003 (or possibly late 2002, I forget), Five Iron Frenzy announced their impending break-up. But…but…I just started liking them! This sent me on a mission: I needed all their albums. So I set out to buy all their studio albums, and I bought tickets to go see their final show in Kansas City (where I bought the remaining albums I didn’t have).

Now, this is a 10 Years Later blog, and Five Iron’s then-last album, The End Is Near, officially released in 2003 at their live shows. But in 2004, it was released to the public in grand fashion as The End Is Here. They gave it everything they possibly could. First off, all of the thirteen original songs were just stellar. “Cannonball” started it off in a blaze; songs like “At Least I’m Not Like All Those Other Old Guys,” “Wizard Needs Food, Badly,” and “That’s How The Story Ends” showcased their classic sense of humor (the last of the three summing up many of their older funny songs); and they showed their reverent side with “It Was Beautiful,” “Something Like Laughter,” and “On Distant Shores.” It was truly one of their best pieces of work. And somehow, they managed to improve on it when they took The End Is Near and transformed it into The End Is Here. For starters, “The Cross of St. Andrew” was a short, albeit excellent bonus track. Then of course there was the second disc with the recording of their then-final show, jam-packed with fan favorites and hilarious hijinks. And there was so much in that recording, they even added a half hour’s worth of bonus recorded material (just a lot of talking and a few versions of “Pootermobile” if I remember correctly) to the very end of disc one. Yes, Five Iron truly loved/loves their fans, and they wanted to give us their all for that dual album. It was a super classy way to go out, and I listened to that album like there was no tomorrow. I know they just put out a new album this past November, and Engine of a Million Plots is solid for sure, but if you ask me, it’s gonna take a lot to top The End Is Here. Now that Five Iron’s discography is on Spotify, you have little excuse to revisit this album if you haven’t recently.

“Promises for Parents” by J.M. Farro

“The Final Countdown” by John DiBiase