It’s certainly hard to believe that a decade has passed since Audio Adrenaline released what would end up being their final studio album. Until My Heart Caves In was a bittersweet record, as it showcased even less of lead singer Mark Stuart’s vocals than the previous album had (Worldwide), with guitarist Tyler Burkum filling in more and more. To diehard fans of the original identity of the band, it came as a pretty hard pill to swallow. (Honestly, I didn’t care for the record at all at first, and was immensely disappointed after my first listen.) 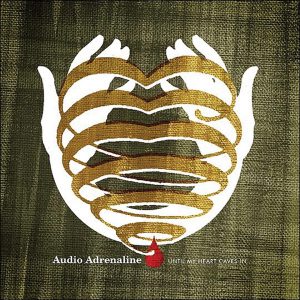 Still, Until My Heart Caves In is an appropriate final bow, of sorts. The opener, “Clap Your Hands,” was a fantastic show starter and it represented the kind of fun rock anthems the band had always offered. “King” was a great original worship song that captured the spirit of their album LIFT and also offered enough of that radio sensibility to keep casual listeners happy. Other highlights like “Undefeated” and their cover of “Your Love Is Lifting Me Higher” helped give some extra punch to a more raw rock effort than Worldwide. But the heartbreaking closer, “Losing Control,” is even more bittersweet given that it wrapped up the band’s final studio album with original members Mark Stuart and Will McGinniss, and longtime members Tyler Burkum and Ben Cissell. The additional tracks on their official farewell hits collection, Adios, were nice encores, but to this day, Until My Heart Caves In marked the end of an era.

Today, in 2015, 8 years after Audio Adrenaline played their final show as a band in Hawaii, the name “Audio Adrenaline” lives on with all new members, carrying the banner to support the orphanage the band started in Haiti, The Hands & Feet Project. While it will never quite be the same, the heart of the band continues. With a new studio album with the new four members releasing May 5th, and a new single, “Love Was Stronger”–a cover of artist Josiah James’ song–available on iTunes and at radio while they tour with Newsboys, it’s a completely different time and season for Audio Adrenaline. The sound of the new single is unlike anything on Until My Heart Caves In, fitting in more so with the current trends of CCM radio, but it remains to be seen (and heard) where the brand’s next album, Sound of the Saints, fits in their discography.

Until My Heart Caves In will always hold a special place in this reviewer’s heart as being the closing statement of the original embodiment of Audio Adrenaline — and it still sounds good, even 10 Years Later.

“An Open Letter To Mark Stuart and the Audio A Camp,” by Alex Caldwell