I have been making these cookies for the last several years, and they are a big hit in our family.  I’ve made note of my personal variations, but you can make them according to the original recipe, if you like.  I make half of the recipe with raisins, and half with chocolate morsels, for those like my daughter-in-law, Amy, who aren’t raisin fans.  The cinnamon-sugar coating is awesome! – JM Farro 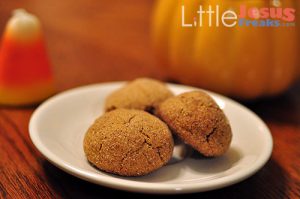 In small bowl, combine sugar and cinnamon; mix well.
Shape dough into 1½ inch balls; roll in cinnamon-sugar mixture.
Place 2 inches apart on ungreased cookie sheets.
Bake at 350 degrees for 12 to 15 minutes, or until cookies are set.
Remove from cookie sheets.

“The Learning Process” by Stacie Vining