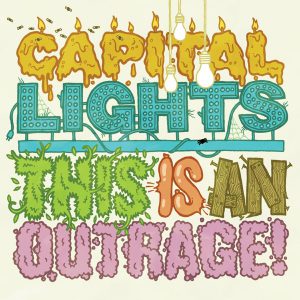 According to recent reports, the demise of Tooth & Nail punk rock group Capital Lights may be slightly exaggerated. However, as it stands now, the band has only left us two items to hold onto: One lone, but touching Christmas song, (“His Favorite Christmas Story”) and their outstanding debut, This Is An Outrage!. Since Capital Light’s album was released in the same year as Children 18:3’s self-titled debut, calling it the best punk rock project of the year will always be disputed. But it sure is a beauty behind such snappy, catchy songs like “Outrage” and “Work It Out.” Bryson Phillips provides the ideal lead vocals for the entire 12 track adventure, and they particularly shine on subtly brilliant “Mile Away” and the quirky “Let The Little Lady Talk.” The album finishes with the strangely captivating “Frank Morris,” a well orchestrated and written finale that details the escape of four inmates from the infamous prison Alcatraz. Spiritual content is low except for “Return,” a song in which the singer talks about the end times. Hopefully we have not heard the last of Capital Lights because the greatness of This Is An Outrage! demands an encore.
– Nathaniel Schexnayder

Our synopsis: “A terrific punk/rock album from a group who disbanded far too early..” (Recommended by JFH’s Nathaniel Schexnayder)
Perfect For: Looking back, looking forward, and fist-pumping fun
Song Highlights: “Outrage,” “Out Of Control,” “Mile Away,” “Work It Out,” and “Frank Morris”

So, what are your thoughts on and experiences with the album This Is An Outrage!? Do you recommend it? If so, why?