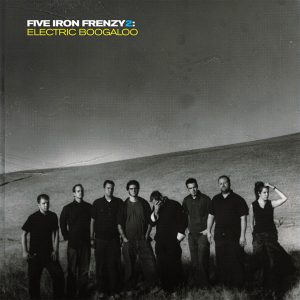 We never thought we’d see it happen.  We all thought that the Denver, Colorado ska octet Five Iron Frenzy had gone to the grave, never to resurrect.  But November 22, 2011 proved to be a glorious day for those fans who had a part of themselves die as well, for Five Iron Frenzy had returned, announcing plans for a brand new album in 2013 (with a few line up changes).  I was pumped, and have been listening to a lot of their music lately, mostly the 2001 jewel of an album, Five Iron Frenzy 2: Electric Boogaloo.

What’s interesting about this album is its almost complete lack of ska.  Sure you have “Plan B,” but the majority of Electric Boogaloo is like a punk/rock album with some ska influence.  This is definitely their heaviest material (other than “Mind For Treason” on Cheeses of Nazareth, of course), with perhaps some early glimpses of what we would get when Roper put out their one and only album.  “Pre-Ex-Girlfriend” comes out of the gate quickly, with other rocking tracks like “Farsighted” and “The Day We Killed.”  There was some songwriting on display from saxophonist Leanor “Jeff the Girl” Ortega in “Car,” plenty of traditional Five Iron satire in “Vultures” and humble lyrics from Reese in “Blue Mix” and “Eulogy.”  Five Iron Frenzy 2: Electric Boogaloo stands out to me as one of their best albums.  Some may agree, some may disagree, but I personally feel it’s one of their strongest releases.  Regardless, you should check it out.  November 2011 marked the ten year anniversary for this album, but it doesn’t feel like it’s been that long.  It still sounds terrific even today… a decade later.