Just in time for Christmas, Amy and I got our wish when Will took his first couple daring steps on his own. For weeks leading up to this momentous event, he had enjoyed being lead around by the hands or shimmying himself along counter tops and other edges while standing. However, he hadn’t yet taken those grand steps on his own. Around December 18th (Amy claims she saw a few steps the day before, but her idea of him walking on his own seemed different than mine), Will took a couple cautious steps on his own. Usually it was a couple little steps and then he flopped to all fours or backwards onto his little rump. But as the days went on that week, he seemed relentless — nothing really deterred him from getting up and trying again.

I was shocked by how quickly Will picked up walking, and how determined he seemed to be once he got a taste for it (and I’m sure our enthusiastic responses to his achievement helped).

In just a few days, Will had almost completely converted over from being a full-time crawler to being pretty strong on those two feet. He still reverts to crawling on occasion, but it’s been really awesome to see him trekking around, wobbling to and fro, on those chubby little legs.

And so has begun the next stage of parenthood with a baby — walking! Will’s 15 months now and had started walking at just over 14 and a half months. Here’s to a new year of parenting! 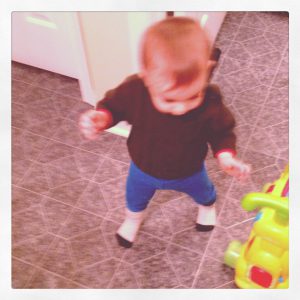