Well, as I type this, our little guy is officially twelve days old. Yes, time flies, but it’s also been one of the weirdest twelve days I’ve ever had.

All kinds of changes have occurred with parenthood. For starters, we’ve probably had more (different) visitors in 12 days at our house than we have in 6 months, which has been cool. While visitors on top of taking care of a newborn and running a household make it difficult to squeeze in work time in addition (yeah, my boss is a slave driver), it’s been a lot of fun to entertain friends and family and seeing old friends who we haven’t seen much of since they themselves have become parents (and have taken interest in the fact that we too have become parents now).

But the exceptionally NOT fun part of all of this has been the emotional rollercoaster of caring for a newborn. I had a bazillion fears leading up till little Will’s birth and I have to admit some have certainly been realized… while others hopefully will not be. My favorite part of parenthood, so far, has been the joys of holding my son — when he’s sleeping peacefully, or is inquisitively wide awake and making adorable faces.

What I absolutely cannot stand about parenthood, so far — and I feel more comfortable confessing this after talking to quite a few dads who can relate — is… THE CRYING.

I have never been a fan of an infant’s cry. I don’t recall ever finding it cute. I also don’t recall it ever being so stinkin’ loud. 🙂

It’s been said that with time you learn what each of your infant’s cries mean, making it easier to console them. But let me tell you something…. Crying is crying. There seem to be different levels of insanity expressed in his crying — whether it’s “Hey! Morons! I’m HUNGRY!” or “Hey! Psychos! I WET MYSELF!” or… well, you get the picture. We’ve been able to discern which needs he has per the schedule of said crying, but then there are those times where you frantically go, “OK… you’ve just been fed… you’ve just been changed… and you just slept for about four hours. WHAT’S LEFT??” Whatever the problem… I’m sure it doesn’t warrant scrunching your face, turning red, and letting out the most horrific sounds known to man that can be best equated to the sound of a duck being tortured mercilessly (and apparently quite grotesquely). On a few occasions now, I’ve had a perfectly upbeat mood instantaneously turned sour upon the no-holds-barred tantrum that this little guy has thrown. We’re talking red face, ear-shattering cry, fidgeting and limbs flailing. The mini-man’s not even two weeks old yet!!!

Granted, in the pooper’s defense, everything is completely new. He’s got two freaky giants responsible for his safety and keeping him alive. He’s in a strange place wearing strange clothes in strange temperatures, and for some bizarre reason, there’s a rumbly in his tumbly every couple hours, his body makes odd noises and emits offensive gooey fluids, and the male giant insists on making goofy faces in close proximity to his own. Life stinks!

But even through only just “fathering” (I use that very, very loosely) pet guinea pigs up until this point, God has managed to teach me those little revelation lessons that make you stop for a moment as if you were just slapped upside the head.

Tonight, after I had been in an upbeat, punchy mood in the wee hours of the morning, Will launched into a complete tantrum while Amy was changing him. You may have thought he was slowly being roasted over a campfire if you didn’t actually SEE Amy changing his diaper. At first, I was cool with it… I was really, really trying. But as if I was being taunted in a cruel and unusual fashion, I found myself growing increasingly impatient with the munchkin’s ear-shattering protests. I went upstairs to gather the garbage in preparations for the weekly pickup in the morning… and to get away from Will’s cries… but I still hit the breaking point (and embarrassingly quickly). I ran back downstairs, grabbed a pacifier, and thrust it into the tyke’s mouth. I wiggled my finger in the center to give him something substantial to cling to and he slowly began to settle down.

At the moment, I was baffled at how he could be so panicky over the fact that his caretakers were simply trying to change his dirty clothes and give him something clean and comfy to wear.

And that’s when it hit me.

How many times has God tried and tried to provide for me, to comfort me, to cleanse me… and I’ve been too stubborn to see it. I lost my patience with my son… but how patient is God with us? I flail my arms and kick my legs when He allows me to go through a trial that inevitably will be for my own good. And when I need to seek Him to get through it unscathed, I instead choose to whine and complain and scream and cry (err… figuratively speaking) until it’s over. As an adult, I still sometimes act like a baby, feeling like I’m all alone in this world. John, you hypocrite! How dense you can be!

So as I stare into the little face of a helpless peanut who was losing it earlier the same night after Amy had handed him to me (and it turned out that he was hungry)… I should really see myself… a stubborn child of God who all too often throws fits when the Father is trying to help instead of surrendering my trust to Him.

Sheesh… I still have so much to learn. 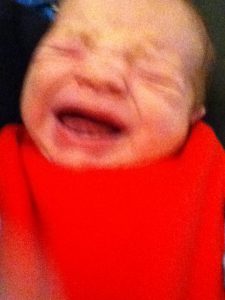 We Recommend: Lucerin Blue, “Tales of the Knife”

“Out with the old, in with a New Year” by John DiBiase

“FIF vs OCS” by Scott Fryberger